SOURCE: JAZZWAX BY MARC MYERS
May 4, 2017
Sign in to view read count 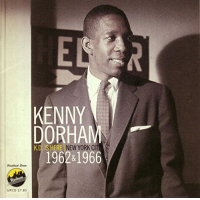 slideshow
Kenny Dorham played his trumpet with an almost pinched tone. It wasn't blistering or round but romantically piercing. The notes were like the dots on exclamation points—just distinct enough to make a point. And he often had them shimmer with a brief bumblebee sound. He used this punctuating and shimmer technique to great effect when playing with Charlie Parker from 1948 to 1950 and throughout the 1950s on great albums such as Tadd Dameron's Fontainebleau, Max Roach + 4, Sonny Rollins' Rollins Plays for Bird, A.K. Salim's Pretty for the People and so many others.

Last December, Uptown Records released K.D. Is Here, featuring two live recordings from 1962 and 1966 that were previously unissued in the States (the tracks did appear on Kenny Dorham Quintet: ‎Live At The Half Note 1966 released in 1992 on the Magnetic label. Both were emceed by Alan Grant, one of the great voices of jazz radio and about whom too little is known.

The 1962 date was broadcast at the Flamboyan in Queens and featured Joe Farrell (ts), Walter Bishop Jr. (p), Larry Gales (b) and Stu Martin (d). This date offers only three tracks (the third, Au Privave is imcomplete), but they show off this ensemble well, especially on If Ever I Should Lose You. Interestingly, Farrell had just come off of two years with Maynard Ferguson's Roulette band.

The 1966 recording was broadcast from New York's Half Note and was aired on WABC-FM, just as mono AM stations were launching FM stereo counterparts and had to fill the airtime, since few advertisers bought time early on. The group included Dorham (tp), Sonny Red (as), Cedar Walton (p), John Ore (b) and Hue Walker (d). The high point is The Shadow of Your Smile, taken at a loping tempo. Dorham works through his solo with grace, turning the song's melody on its head. What's especially fun is listening to Kenny seemingly wind up in a difficult place during his solo but find a way out of it and landing right side up.

Also of note is the playing of his pianists here, Walter Bishop Jr. and Cedar Walton. Dorham always had great keyboardists on board. Both were shrewd, confident players who typically had a plan for the musical story that intended to tell.

Naturally, after listening to this CD, I brought up Una Mas (1963), which features Kenny Dorham (tp), Joe Henderson (ts), Herbie Hancock (p), Butch Warren (b) and Tony Williams (d). Still one of the most magnificent albums of the early 1960s.

Sadly, as beautiful a trumpet player as Dorham was, he never received the credit he was due nor the recognition afforded peers such as Dizzy Gillespie and Miles Davis. Dorham was a more subtle and subdued giant.