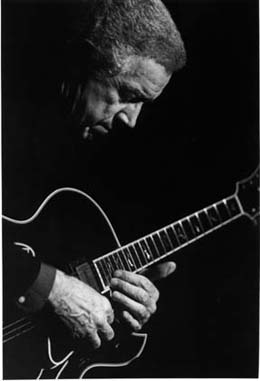 slideshow
Kenny Burrell has joined the parade of major jazz artists entering octogenarianism and performing at a high level. The guitarist is of a generation of Detroit musicians including Tommy Flanagan, Pepper Adams, Elvin Jones, Roland Hanna and Louis Hayes that made a significant impact on jazz. Burrell's 80th birthday was a week ago. He is preparing for a concert next weekend. Here's more from a Scott Zimberg profile of the guitarist in The Los Angeles Times:

Part of what's kept Burrell afloat over the years is musical focus. Music, he says, “has to be a balance between heart and mind. The thing is to not let your technique or your analytical side overshadow your feelings. There's one more thing you've gotta do—you've got to be consistent. That takes work, it takes concentration, it takes focus, it takes dedication."

He's often praised for qualities like taste, discipline and aversion to musical cliché. “I sometimes think that phrasing is a lost art in jazz, and perhaps especially among guitarists," Gioia says. “But Burrell knows how to shape a phrase, where to place the proper emphasis, how to construct a solo. He has unerring instincts—like a great boxer, who has a feel for the right move at the right moment."

Burrell sees jazz soloing as a conversation between musician and listener. “If I was talking too fast, or not taking breaths, not giving you time to take it in—it would not get across very well."

To him, the blues—which can lead lesser players to volubility—is about understatement. Music begins and ends with silence, he says. “In between, it's up to you. You should make a statement. And when you've made your statement—which should be important to you, you should mean it—you should stop."

To read all of Timberg's article, which traces Burrell's career, go here.