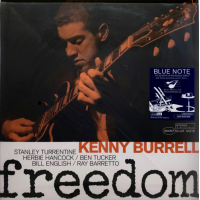 slideshow
In March 1963, guitarist Kenny Burrell was at Rudy Van Gelder's studio in New Jersey to record singles for Blue Note or songs for an album. For whatever reason, the musicians on the date only could manage to get through three songs, with each one requiring a high number of takes. Burrell returned to Van Gelder's studio in October 1964 to record five songs with a completely different group. Here again, a sizable number of takes were needed on most tracks. Long story short, the material wasn't discovered until 1980, when re-issue producer Michael Cuscuna found the tapes in the Blue Note vaults.

The material was then cobbled together for a Blue Note album called Freedom but released only in Japan. My guess is that Capitol, which owned Blue Note then, was too busy re-issuing existing Blue Note releases to bother with the U.S. market. The States would have to wait until 2011 before Freedom was issued on CD. In 1980, Bob Porter surmised in his liner notes that the material was recorded originally for release as singles. It's hard to know, since only Loie and The Good Life were issued as a 45.

In listening to the melody-rich and swinging album yesterday, I found it hard to understand the decision-making process that held up the recordings for so long and why it remains to obscure. Freedom is a groovy tiger from start to finish and features superb sidemen and songs.

I'm not sure if this is relevant, but Burrell didn't record again for Blue Note between the two sessions above except as a sideman on Stanley Turrentine's Hustlin' in January 1964. He also wouldn't record as a leader for the label ever again.

JazzWax clip: Here's Freedom from the album (the track also is available at Spotify)...