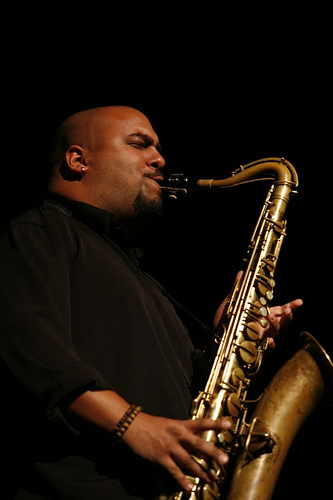 Having been on faculty at The University of Miami for the past three years, Troy is currently based in New York, is celebrating his 4th internationally released record as a leader, Nu-Jive (2011), and continues to maintain a busy performance and recording schedule around the globe.

The music of Troy Roberts’ Nu-Jive is an eclectic concoction of soul, funk, R&B, Latin, gospel, Indian classical music, and even glimpses of the 19th century romantic period – all musically glued together by every player’s great sense of jazz etiquette with four outstanding sidemen: Silvano Monasterios, piano, Tim Jago, guitar, Eric England, bass, and David Chiverton, drums. However, the main concept behind the group is to serve as the meeting place of four great musical minds.

“Whilst it’s not common to display virtuosity, it's even rarer to be wonderfully creative while doing so. But the rarest of all gifts is to have a unique voice; a sound that is unmistakably your own. Troy Roberts has this gift. He amply demonstrates that it’s possible to pay homage to the great tenor players of jazz and still create a fresh approach that leaves the listener always in anticipation of what he’ll come up with next.” —James Morrison