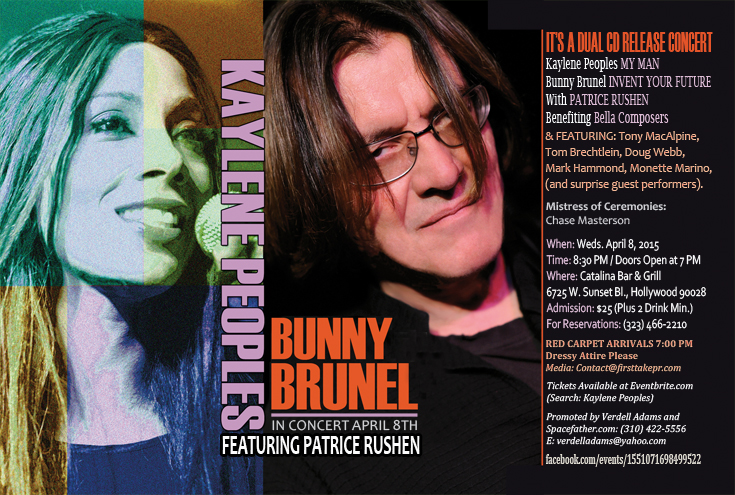 slideshow
An exciting lineup of musicians will play for a worthy cause April 8, 2015 at Catalina Bar & Grill at 8:30pm. Famed fusion, Grammy nominated bassist Bunny Brunel and award-winner producer, singer and flutist Kaylene Peoples are celebrating the release of their respective CDs (Invent Your Future and My Man) to raise money for the exciting new charity Bella Composers. This benefit concert promises to be a night to remember. Star Trek actor Chase Masterson will be hosting the evening; and multi-Grammy nominated recording artist Patrice Rushen will be featured on piano. The rest of the lineup includes Grammy-nominee guitarist Tony MacAlpine, legendary drummer Tom Brechtlein, saxophonist Doug Webb, guitarist Mark Hammond, and percussionist Monette Marino.

Bella Composers was conceived by Kaylene Peoples, who is also a composer, orchestrator, and conductor. “I have always had a passion for traditional forms of music. Having written several sonata-style chamber pieces, including compositions on a grand scale, I am excited to spearhead an organization that will offer satisfying opportunities to what seemed like for centuries an unlikely demographic. I always throw people off with the questions, ‘Did you know Mozart had a sister? Did you know she was a composer, too?’” —Kaylene Peoples

Pre-dating medieval music, and as early as the 8th century are documented compositions written by women in the papacy that have long been forgotten. We assume that popular “classical” music is gender-specific.

“When non-music scholars were asked if they knew that women were/are composers too, most people were surprised by that information, or they lumped together popular songwriters in the recording industry into the same category as classical and neo-classical composers. Not to diminish those accomplishments, but it just isn’t the same as a Wagner, Beethoven, or Chopin. Just turn on any classical station; you’ll be waiting days to hear a composition written by a woman. Yet those compositions are out there, and those female composers did and do exist,” continues Peoples.

Bella Composers is a charity designed to give women composers exposure. The organization will be launched with a composer's competition in which five women are chosen to have their original music performed by a live orchestra in a performing arts center or traditional concert setting. One of the female composer’s works will be presented posthumously, resurrecting her composition for the world to hear. How does it all work? Composers submit scores; a panel of composers/orchestrators rank the top finalists; and the top five winning scores will be performed live by famed virtuosos at a top Los Angeles venue, kicking off what will become an annual event. There are no restrictions, just that you have to be born a woman.

“Women musicians and composers do not get recognized as much for their talent and value as do men. Bella Composers is changing the way they are perceived in the industry and general public.” —Bunny Brunel

On April 8, 2015, at Catalina Bar & Grill, there will be a red carpet; Producer/Executive Producer of Girls in the Band Michael Greene will be speaking; and a short documentary will be screened about Bella Composers. In addition to the superb music that evening, there will be a few “surprise” guest performers. Sponsoring the event are SIR Studios, The Mouse House, Agenda Magazine, Boogsey Music, NIKAIA Records, Victor Alfaro Productions, and Spacefather.com.

KAYLENE PEOPLES MY MAN: What do Dave Brubeck, Chick Corea, and Ella Fitzgerald all have in common? Songs they made popular are making an appearance on MY MAN, the new CD by jazz singer/flutist and award-winner music producer Kaylene Peoples. Peoples is known for taking well-known classics and breathing new life into them. On MY MAN she gives them brand new, modern day arrangements, while still keeping the tradition of an acoustic jazz quintet. There’s nothing new about this set up except the fact that Peoples impresses you with her broad range of vocal styles and unparalleled flute chops. But MY MAN doesn’t just stop there. A special guest performance by three-time Grammy nominee flutist Hubert Laws, Grammy nominee fusion bassist Bunny Brunel, and multi-Platinum selling and Emmy nominee pianist Bobby Lyle share the spotlight on Kaylene’s unique arrangement of John Coltrane’s “Giant Steps”-–a first-time recording together by the three legendary performers.

BUNNY BRUNEL INVENT YOUR FUTURE: Inventive, magical, inspiring... legendary fusion bassist Bunny Brunel has done it again with his new release INVENT YOUR FUTURE. Featuring Jazz Fusion notables Patrick Moraz to Virgil Donati to Patrice Rushen, and more, Brunel wows us with his virtuoso bass playing, imaginative arrangements, and exciting compositions by both himself and Chick Corea. Brunel also shares his own spotlight by featuring a song by Jaco Pastorius, as well as other thoughtful yet famous song collaborators.

ABOUT PATRICE RUSHEN: Multi-Grammy nominated artist Patrice Rushen is a composer, producer, and international recording artist. Rushen was the first woman to serve as Musical Director for the 46th, 47th, & 48th Annual Grammy Awards; the first woman in 43 years to serve as Head Composer/Musical Director for television’s highest honor, the Emmy Awards; and the first woman musical director of the NAACP Image Awards, an honor she held for 12 consecutive years. Currently, her career focus is composing for films, television, and orchestras. Rushen spends whatever free time she has working closely with the Los Angeles Cultural Affairs Department, NARAS “Grammy In the Schools” program, and other organizations dedicated to establishing music education and mentorship programs for inner-city youth.

ABOUT CHASE MASTERSON: Chase Masterson has most recently been seen guest starring on CW's The Flash, which won the People's Choice Award for “Favorite New Drama. “Best known for her breakout role on Star Trek: Deep Space Nine, one of the highest-rated syndicated shows of all time, Chase is loved by millions of fans worldwide and has been listed in “10 SEXIEST ALIENS IN TV HISTORY" • AOL “TOP 25 TV HOTTIES" • UGO “50 SEXIEST WOMEN" • Femme Fatales Magazine “TOP 20 PEOPLE TO WATCH" • Sci-Fi Universe “HOT LEADING LADIES OF FILM" • Film Fetish FAVORITE SCIENCE FICTION ACTRESS ON TV" • TV Guide's online fan poll. Along with her acting career, Chase is a fabulous singer and a lover of jazz!