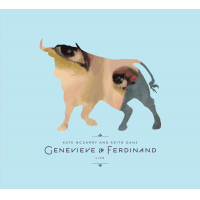 slideshow
New CD Is a Dynamic Duet with Her Husband, Guitarist Keith Ganz

Grammy-nominated vocalist Kate McGarry, whose most recent release (2012's Girl Talk) scored top honors on many of last year's Best Of lists, will take a slightly different tack on her first release for Sunnyside Records. Genevieve & Ferdinand, an intimate live set which features McGarry's soaring vocals bolstered by Keith Ganz's melodic acoustic guitar stylings, and which will be released on February 4, 2014, spans a dazzling stylistic palette. A mix of original compositions and uniquely imaginative interpretations of songs written by the likes of Paul Simon, Todd Rundgren, James Taylor, Toninho Horta, Irving Berlin, and Jerome Kern/Oscar Hammerstein, Genevieve & Ferdinand is McGarry's first duo project and highlights the special connection—musical and emotional - between the singer and her husband of 10 years.

Recorded live in concert at Soundpure Studios in Durham, North Carolina, the album is titled after the name the duo performs under. “We both wanted a more poetic band name than just 'Kate and Keith Duo'," explains McGarry. “Genevieve is my middle name. It connects me to a more free spirited side of myself, my inner troubadour, if you will. Keith has always reminded me of Ferdinand, the peaceful bull from that old children's book who only wants to sit under a tree and smell the flowers while the other bulls are fighting. For us, Genevieve & Ferdinand evokes some of the imagery and atmosphere of a playful and mysterious realm we seem to fall into when we make music together."

Genevieve & Ferdinand kicks off with the one track on the album that was not recorded live, a lovely, subtle rendition of Paul Simon's “American Tune." Captured at the couple's home in a single take, Ganz says that “when you hear Kate sing in person, it always feels like a movie is starting. What was just a neutral space is transformed into a cinematic land full of magic, mystery and possibility." McGarry echoes the sentiment." Keith's fingerpicking style has a gentle momentum that makes the song flow organically. He investigates a classic song with an ear for what has not been said yet and invites me into that space to meet him."

The original song “Ten Little Indians" is McGarry's musical memoir of her parents' lives, reflected in the eyes of their ten children. It's a poignant paean of gratitude, a tender exploration of the joys and sorrows of lives well lived and filled with love. “During their lives, my parents taught us to work together, to sing together and to pray together; from their deathbeds they taught more than I could ever imagine about those same things," says McGarry.

McGarry's long standing affinity for Brazilian music is evidenced on the duo's energetic medley of Toninho Horta's and Pat Metheny's “Aquelas Coisas Todas/Aqui O/Third Wind." “Keith's virtuosic and adventurous guitar accompaniment is a wonder to behold and inspired a spontaneous scat solo," states McGarry. “We like to play songs that take us out on a limb during every live set, and I sure do feel that on this song. It's 'Mr. Toad's Wild Ride' for me!"

There's no doubt who McGarry is singing about on the album's languorous take on Jerome Kern's and Oscar Hammerstein's “Can't Help Loving That Man." The openness and playful sense of swing that marked the duo's first performance of this song some ten years back - serendipitously on Valentine's Day - at NYC's Cornelia Street Café, still resonates in performance today.

The duo cite Devon Sproule and her husband Paul Curreri among their favorite songwriters, and compositions from both are featured on Genevieve & Ferdinand. Sproule's starkly beautiful “Plea for a Good Night's Rest" allows McGarry space to demonstrate all the riches of her singing - the soulful timbres and textures of her voice, storytelling full of wisdom, wonder and honesty, and ringing melodies that sparkle like gemstones. “Keith introduced me to their music on our third date, and suffice to say, the deal was sealed," remembers McGarry. “They played at our wedding five months later."

James Taylor's “Line 'Em Up" is reset over an atmospheric pulse. “It can be a challenge to create a fresh cover of a song by such an iconic artist," says Ganz. “'Line 'Em Up' has enough twists and turns that I was able to expand on the chords to create a little different setting for Kate without feeling like I was abusing the poignancy of the composition."

Ganz's original, “Mr. Long Gones," was originally written as a solo guitar piece, inspired by the aforementioned Paul Curreri. “Kate's voice feels like a natural extension of my melodies, and she gives wings to the melody on the bridge in a way that would have been very difficult to achieve by myself," says the composer. “Keith's compositions bring me back to nature," explains McGarry. “Hearing this song is like going on a slow walk through the woods with him, and seeing the smallest details of a running stream through his playful eyes and fingers."

The duo return to the classics with Irving Berlin's “Let's Face the Music and Dance," which McGarry first recorded as the opening track on her Grammy-nominated album, If Less is More...Nothing is Everything. Ganz's dramatic reworking of the tune is even more striking in the duo setting. “When I listen to Keith's playing, I never hear a guitar accompanying a singer. Instead he creates subtle melodic and rhythmic themes that shift and expand as the song and story I am singing unfolds," says McGarry.

Theo Bleckmann, the iconoclastic singer and long time friend of McGarry's, along with Australian vocalist Gian Slater contribute exquisite vocals to Bleckmann's arrangement of Todd Rundgren's “Pretending to Care." The densely layered harmonies create a vivid contrast for the starkness of Charlie Chaplin's “Smile," which follows.

Genevieve & Ferdinand concludes with Paul Curreri's contemplative “Beneath a Crozet Trestle Bridge." McGarry inhabits every nuance of Curreri's rustic imagery and the duo rides Ganz's driving guitar to a close, leaving the audience on an audible high.

McGarry and Ganz - or Genevieve & Ferdinand - will launch a tour in February to support the release of the new album. The following dates are confirmed, with more to follow:

With 5 critically acclaimed CDs and a Grammy nomination for Best Jazz Vocal CD to her credit, Kate McGarry is recognized as an international jazz artist who brings authenticity and vitality to every song she sings. The Wall St. Journal has called her music, “...austere and elegant...an exceptionally appealing blend of folk and jazz."

Raised in a large Irish Catholic family in Massachusetts, Kate and her nine siblings were surrounded by diverse musical influences and spent many nights singing together. She graduated from the University of Massachusetts at Amherst with a degree in Afro-American Music and Jazz and spent a decade in Los Angeles practicing her craft before moving to NYC.

Musical collaborations include projects with jazz and Broadway luminaries including Fred Hersch, Kurt Elling, Maria Schneider, Jason Robert Brown, John Hollenbeck and the vocal group Moss which featured Theo Bleckmann, Peter Eldridge, Lauren Kinhan and Luciana Souza. She performs in venerated jazz clubs and festivals throughout the U.S. and abroad, and as an educator has served on the faculty of Manhattan School of Music and this fall has been on faculty at the New England Conservatory of Music in Boston. Kate represented the U.S. State Department and Jazz at Lincoln Center as a jazz ambassador for 3 years in the American Music Abroad program, and has been listed the past 5 years as a Rising Star in Downbeat Magazine's Critic's Poll. McGarry has been featured on NPR's All Things Considered, Marion McPartland's Piano Jazz, and Jazz Set with Dee Dee Bridgewater.

Keith Ganz is a guitarist, composer, arranger, and producer. In addition to his Grammy-nominated collaborations with Kate McGarry, he has been the guitarist of choice for Harry Connick Jr., Kurt Elling, Luciana Souza, Peter Eldridge and many more acclaimed vocalists. He has also performed and/or recorded with a host of jazz legends including Christian McBride, Fred Hersch, Victor Lewis, Chris Potter, Andy Bey, Billy Drummond, Jay Anderson, and many others. He has performed on Late Night with David Letterman, The Oprah Winfrey Show, Ellen, The View and Australian Idol, and toured in four continents.

Kate and Keith left NYC for Durham NC in 2010, where they enjoy kinder, gentler winters. Kate's vision for the future includes recording, touring, composing and collaborating as well as teaching and continuing to pass on the many gifts that the jazz music tradition has given to her. As The Nashville Scene noted, “McGarry embraces jazz's freedom and points the genre toward a future that's as fresh and thrilling as its past."