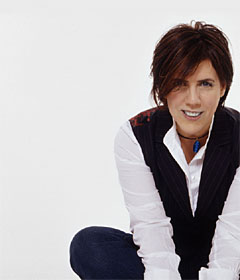 slideshow
Kate McGarry, hailed by Downbeat as one of the top female vocalists of 2007, will bring her inspired repertoire of standard and not-so-standard fare to LA's Jazz Bakery on June 17th. A singer who's also a favorite among singers, McGarry, who has not performed in the LA area in over a year, will preview tracks from the upcoming CD 'If Less Is More...Nothing Is Everything' as well as her 2007 release 'The Target, ' praised by The New York Times as one of the top jazz vocal cds of that year. McGarry's set will feature a collection of expressive original compositions and arrangements as well as personal interpretations of such diverse artists as The Cars, Bjork, Irving Berlin and Joni Mitchell. McGarry will perform with her Trio featuring Keith Ganz (guitar) and Clarence Penn (percussion).

“Kate McGarry is the best of a new breed of jazz vocalists whose pop sensibilities are integrated into their music."
Philadelphia Inquirer

“McGarry has the pure, untrammeled voice of an ingenue who finds wonder in the simplest things."
Downbeat

“A bold, brave adventurer, McGarry has, by opting for the musical road less traveled, placed herself firmly on the road to ever-widening critical and popular success."
JazzTimes