Karrin Allyson at the Seasons

SOURCE: RIFFTIDES BY DOUG RAMSEY
May 10, 2009
Sign in to view read count 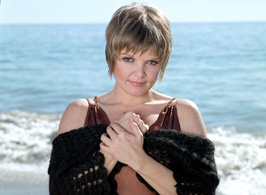 slideshow
Beginning a west coast tour, Karrin Allyson took her quartet into The Seasons Thursday evening. Alternating between bossa nova subtlety and blues forthrightness, she drew liberally from the Brazilian repertoire of her current Imagina CD, singing in Portuguese and English. She sparkled with delicacy and brightness in Antonio Carlos Jobim classics including “Estrada Branca (This Happy Madness)," “Double Rainbow" and “Desafinado." She displayed her Kansas City roots in “Some of My Best Friends are the Blues," Ellington's “I Ain't Got Nothin' but the Blues" and Hank Mobley's “The Turnaround." She blends grit and folk wisdom into the sophistication of her blues singing and piano playing.

Guitarist Rod Fleeman and drummer Todd Strait, Allyson's colleagues since her career beginnings in Kansas City in the early 1990s, and bassist Jeff Johnson have uncanny levels of empathy with her and among one another. Allyson gave each of them extensive solo time, and each got sustained displays of enthusiasm from the audience. At one point, a Fleeman blues solo on Wes Montgomery's “Fried Pies" inspired a man sitting near me to ask no one in particular, “Where the hell did he come from?"

In Wayne Shorter's “Footprints," Allyson achieved devastating minor blues poignancy abetted by rich chord voicings in her own piano accompaniment. Asked in a post-intermission chat about the increased depth of her piano playing, she seemed taken aback, as if it were being called to her attention for the first time. In fact, she is a piano soloist and accompanist of fluency and harmonic resourcefulness. Allyson's concert was a demonstration of the completeness of her musicianship as a vocalist, a pianist, and a leader who inspires and interacts with her sidemen. Her group is a band, in every sense. She elicited two standing ovations, gave two encores and left the audience hoping for more.

Tonight, Allyson and company perform at the San Francisco Jazz Festival. To see if they're coming to a town near you, check their itinerary.