SOURCE: ALL ABOUT JAZZ PUBLICITY
October 9, 2009
Sign in to view read count 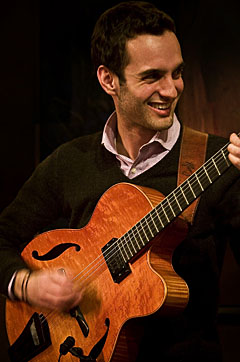 Julian Lage is a former child prodigy guitarist who has developed into one of the world's leading guitarists, playing since age five, then playing with such renowned artists Carlos Santana (when he was eight years old), Pat Metheny, Kenny Werner, Toots Thielemans, Martin Taylor, and David Grisman, among others, resulting in Lage being the subject of the 1997 Academy Award nominated documentary “Jules at Eight". In addition to performing, Lage has recorded as a duo with Grisman (the 1999 release Dawg Duos), and contributed a fine cover of “In a Sentimental Mood" with Martin Taylor and David Grisman, for the 2000 compilation Acoustic Disc: 100% Handmade Music, Vol. V. Lage has also appeared at numerous jazz concerts/festivals, including the St. Louis Jazz Festival, the Monterey Jazz Festival, and the San Francisco Jazz Festival, and performed on the 2000 Grammy Awards. Lage performs regularly with pianist Taylor Eigsti.

In 2005 Gary Burton “championed" him in Next Generation. And Lage has recently launched his debut album “Sounding Point" on Emarcy Records.

As a performer, Dave Schroeders main musical focus has been leading the eclectic New York City-based ensemble, Combo Nuvo, where he displays his skills on multiple woodwinds and composition. In addition to his own group, he has performed and/or recorded with a wide array of artists including Teo Macero, Larry Coryell, Airto Moreira, Oscar Castro-Neves, Lee Konitz, Don Friedman, and Kenny Werner.