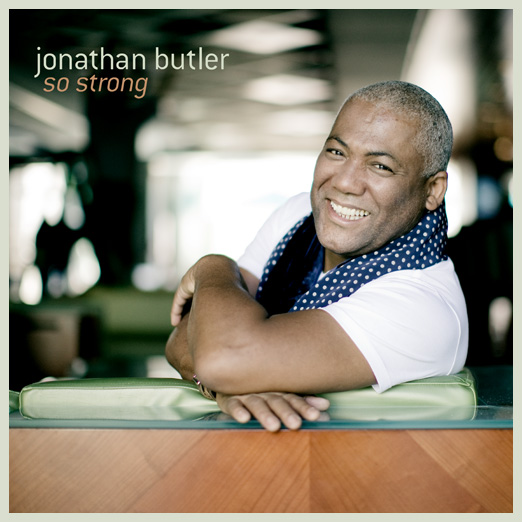 LOS ANGELES - Critically acclaimed singer, songwriter and guitarist Jonathan Butler celebrates life in all its complexity on So Strong, the brand-new CD due May 11th on Rendezvous Music. This inspirational, 11-track effort finds the South African born hit-maker reaching deep within to glory in survival and revival after a year of personal turmoil that might have silenced lesser artists for an extended period. But not Jonathan, whose new studio outing is yet another testament to his gift for transmitting a profound sense of joy through his music, despite his hardships. In the last year, the multi-talented artist lost his beloved mother then watched his close friend, former NBA great and smooth jazz star Wayman Tisdale, lose his battle with bone cancer. Jonathan also stood strong to support his wife, Barenese, as she struggled with cancer.

Butler penned ten brand-new tunes that are refreshingly upbeat and philosophical. He named the new collection So Strong for how the experience has tempered him, both spiritually and creatively. “My personality, my passion, and my beliefs are wrapped up in this album," Butler declares. “I never let negativity stop me from enjoying life. The experiences mold and shape you. I want listeners to know when they hear the CD that there is always a reason to celebrate."

Butler should know - his early life was filled with seemingly insurmountable obstacles that few could imagine. Born under the shadow of South African apartheid and raised in poverty, Butler used his faith and musical talent to transcend his surroundings. While still in his teens, the singer-guitarist became the first non-white artist to be played on white mainstream radio and appear on national South African television. Statesman and national hero Nelson Mandela credits Butler's music as having inspired him during his long days of imprisonment. Today, Butler has a career that spans three decades, with his artistry earning international acclaim. He has topped the Billboard charts with Contemporary Jazz, R&B, and Gospel albums, connecting with fans around the world who connect with his soul stirring intensity.

So Strong is a genre-defying album of R&B grooves and instrumental tracks that showcase Butler's always soulful vocals and masterful guitar style. His first studio effort in three years, the CD is not only a testament to Butler's indomitable spirit, but continued proof of his prodigious talents as a composer and performer. The title track serves as the set's urban adult radio single, with its playful vibe, head-nodding tempo, and Butler's soaring vocals. Says Butler, “'So Strong' says everything about where I am," adding, “It's totally for the dance floor, and in these times we have to get people to dance."

In addition to writing ten of the eleven tracks, Butler played most of the instruments on the set and also produced the project himself. The CD includes the smooth jazz-oriented tune “Make Room For Me," featuring saxophonist Dave Koz. Koz contributed the title for the single, as well as for the album track “I Pay Respect," Butler's instrumental homage to his native South Africa. In addition to Koz, trumpeter Rick Braun and saxophonist Michael Lington add their flavors to the mix, while Butler's daughters Randy and Jodie provide background vocals. Neo soul diva Angie Stone shares vocals with Butler on the romantic groove “Be Here With You." Of Stone, Butler notes, “She brought depth to the record. She has an amazing voice where you know she has stories to tell."

The musical celebration carries through such uplifting entries as “You Got To Believe In Something," “Good Times," and a gorgeously melodic tribute to his granddaughter, “Avia/ For My Baby." The album also features Butler's thoughtful reinterpretation of Johnny Nash's enduring declaration of optimism, “I Can See Clearly Now." Of the tune, Butler says, “It's my testimony."

So Strong is the essence of what Jonathan Butler is about as an artist, with a mlange of soul, jazz, contemporary gospel, and South African sounds. It's a winning formula that has evolved since he first emerged in 1985 with his debut Introducing Jonathan Butler. Today, he continues to serve as a stylistic bridge and an ongoing inspiration to all who hear him. He's particularly proud of So Strong, adding, “This CD has legs. I believe this music will stand the test of time."

Butler will hit the road from June through August 2010 with Dave Koz on the North American Together Again tour, playing tracks from So Strong, as well as, such enduring Butler hits as “Sara Sara, “ “Lies," “Mandela Bay," and his hit version of James Taylor's “Fire And Rain." And thanks to his crowd-pleasing performances and intimate connection with his fans, Butler has once again been invited to be a headlining performer on the annual Smooth Jazz Cruise, with the 2011 edition to set sail to the Caribbean in late January of next year.