SOURCE: JAZZWAX BY MARC MYERS
May 9, 2016
Sign in to view read count 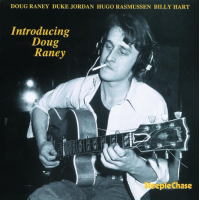 slideshow
Doug Raney (1956-2016), a son of guitar legend Jimmy Raney and a brilliant lyrical guitarist in his own right who lived in Denmark for much of his career, died of heart failure in Copenhagen on May 1, according to his brother Jon. He was 59.

Many jazz fans in the States are unfamiliar with Raney, since he toured here infrequently and gave few interviews. Those who do know his music have been exposed to it largely through his albums, many of which were recorded in Copenhagen for the SteepleChase label. Raney's first album was Strings Attached, recorded in 1975 in New York with his father Jimmy and pianist Al Haig. By 1977, Raney had moved to Denmark.

Raney's style combined the easy swing of Wes Montgomery with the tasty emotionalism of Jim Hall. Raney often was teamed with pianist Horace Parlan, who was in perfect sync with Raney's approach and was a Denmark-based expatriate. Raney's last known album was as a sideman on Jesper Lundgaard's 2013 release for the Danish Storyville label called Love & Peace: The Music of Horace Parlan.

There are no bad Doug Raney albums. Virtually everything he played was executed with enormous taste and technical discipline. He was a carefully listener of his own playing and knew exactly which notes sounded best to make a personal statement. His juicy swing could be deceptive, since the careful listener also could hear significant sensitivity and sadness in Raney's notes. It's unclear why Raney chose Denmark as a save emotional haven or why he preferred to remain there. One assumes that whatever demons Raney had, he could better manage them there in the company of those he trusted and loved there. His guitar will be missed.

Last week, I caught up with Jon, Doug's brother, shortly after Doug's passing:

“I'm in Copenhagen sorting out the details of Doug's memorial and final resting place. There is a memorial here Monday, May 9, that a Danish guitarist and I are organizing. I'm collecting my thoughts today as to what to say. The things I feel are pretty well expressed in the blog I wrote about him a few days ago titled Goodbye My Brother at my site. [Photo above of Jon Raney]

“Doug was in very poor health recently, with his smoker's lungs sometimes requiring oxygen. He had other things wrong with his legs. His health had been deteriorating over the years with a few bounce-backs here and there. He died in his sleep in a chair. The attendants didn't wish to disturb him and came back later and found he had passed. The official death was likely heart failure. There wasn't an official autopsy as we felt that was unnecessary under the circumstances.

“Doug was struggling with prior drug addiction and was on the program for a long time. But it was really his addiction to alcohol, in excess, that did him in. He was a different type of drunk than my father, who became more of a Mr. Hyde when he drank. Doug lived much of his life as a functioning alcoholic so it was sort of a wide spectrum in terms of behavior. But in later years, his personality under the influence had moved closer to my Dad's, where he suddenly was more frequently not capable of fulfilling his musical commitments.

“A non-traditional memorial and service is being held in Copenhagen in the famous Jazzhus Montmartre club on Monday, May 9, at 4 p.m. We are treating it like a church. There will be musicians coming up and playing in his honor. This is sort of full circle for Doug as it is likely the first major club he played in when arriving in Europe in '77. I am working on the program and details now. There will be more details as I can voice them. All the while struggling with my own grief as I'm sure you understand."

JazzWax clips: Here's Doug Raney playing If You Could See Me Now in 1978 from his Cuttin' Loose album with Bernt Rosengren (fl) Horace Parlan (p) Niels-Henning Orsted Pedersen (b) and Billy Hart (d)...

Here's Raney with the Chet Baker Trio, featuring Baker, Raney and Niels-Henning Orsted Pedersen on bass, from Baker's The Touch of Your Lips from 1979 in Copenhagen...