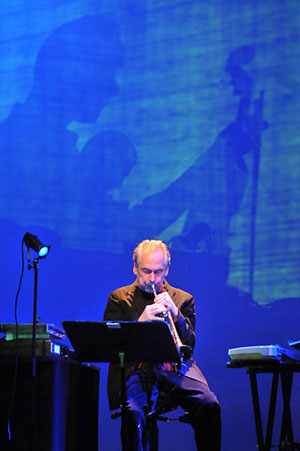 slideshow
Jon Hassell Brings his Unclassifiable Music to Royce Hall on Feb. 13 as Part of his First U.S. tour in Twenty Years.

On the heels of his newest album release, Last night the moon came dropping its clothes in the street, Jon Hassell brings his unclassifiable musical colors and a unique electro-acoustic ensemble, with special guest Tunisian vocalist and oud player Dhafer Youssef, to Royce Hall on Feb. 13 as part of his first U.S. tour in two decades.

With the 2005 album Maarifa Street, trumpet visionary Jon Hassell reached a new milestone in nearly 30 years of exploring a musical realm he dubbed ‘the Fourth World’ – a landscape of haunting beauty, of magic and emotion, of dreams and hyper-reality.

With his current band, also named Maarifa Street, Hassell has expanded the horizons of a musical universe that already seemed boundless. a history that saw him playing on the original recording of Terry Riley’s earthshaking “In C,” teaming with Brian Eno for two ‘80s albums of indefinable multi-cultural/multi-technological blends, being tapped by director Wim Wenders for the otherworldly score of “Million Dollar Hotel” and having an incalculable influence on a generation of musicians and producers searching for their own new modes of expression.

“Jon Hassell is an extraterrestrial in the jazz galaxy,” wrote Playboy in a five-star review for the 2005 album. “Teeming with details, free as the wind blowing in the desert, this celestial jazz is amazing. Edgy but eminently accessible, Maarifa Street leads us to the peaks where the distant horizon becomes a mirage which this music embraces. An unbelievable invitation to meditation.”

Describing a Maarifa Street concert is not easy, but as All About Jazz put it, “This isn't about chops: it's about creating a context of deep, physical groove combined with the potential of live sampling, slow evolution often driven by Freeman's in-the-gut bass tone, and the injection of other cultural paradigms.”

Despite the problems with putting it into words, the praise is nothing new. In 1985, Jon Pareles of the New York Times held Hassell’s work alongside some of the essential music from a new era of global consciousness: “The fusion of new and old, Western and non-Western techniques has produced extraordinary music, from Steve Reich's 'Drumming' to Jon Hassell's 'Fourth World Music' to John McLaughlin's first Mahavishnu Orchestra albums."

Interview magazine declared, “Jon Hassell is one of the world's most innovative musicians and one of today's most influential composers. His music has established a genre that goes beyond the notions of jazz, neo-classicism, new music or new age. Jon Hassell's concept of Fourth World Music transcends the so-called 'primitive' and the so-called 'futurist' by seamlessly uniting traditional rhythmic and melodic concepts with recombinant aesthetics made possible by the creations of high technology."

And in 1982, critic Robert Palmer marveled at the startling sonics of Hassell’s incomparable Dream Theory in Malaya: “Tapes of frogs in a bog and of Malayan tribesmen beating out rhythms in the flowing waters of a stream are woven into the music like shimmering threads, lending it an almost subliminal aliveness... The result is sheer magic.”

That album was the second with Eno, following the name-making Possible Musics, which was the first under the Fourth World banner. Hassell has described the approach as “a unified primitive/futuristic sound combining features of world ethnic styles with advanced electronic techniques."

And Eno himself said of that work, “Jon Hassell is an inventor of new forms of music – of new ideas of what music could be and how it might be made. His work is drawn from his whole cultural experience without fear or prejudice. It is an optimistic, global vision that suggests not only possible musics but possible futures.”

That was a fulfillment of experiments Memphis-born Hassell had been conducting and participating in since the ’60, when after studying at the Eastman School of Music before studying in Europe with sound philosopher Karlheinz Stockhausen. From there he went to work with minimalist pioneers Riley and LaMonte Young and in the early ‘70s was taken under the wing of Indian vocalist Pandit Pran Nath, adapting Nath’s highly disciplined approach to breath and melodic lines to trumpet.

His first album, 1978’s Vernal Equinox, introduced the concepts, which evoked the most atmospheric sounds of Miles Davis while pointing to whole new territories. The more jazz-oriented Earthquake Island followed the next year before Hassell first teamed with Eno, a relationship that in addition to the two “Fourth World” albums lead to appearances on recordings by Talking Heads and Peter Gabriel (the soundtrack for “The Last Temptation of Christ”), while Eno collaborator Daniel Lanois co-produced the 1983 album Aka-Dabari-Java, subtitled Magic Realism. (Maarifa Street was dubbed a follow-up, Magic Realism 2.) A 1982 score for a Venice stage production earned him an Ubu Award for best music for a theatrical work, and he composed “Pano de Costa” for the noted Kronos Quartet. More albums followed, each its own distinct sonic experiment: 1986’s Power Spot (produced by Eno and Lanois), 1987’s The Surgeon of Nightsky Restores Dead Things by the Power of Sound, 1989’s Flash of the Spirit collaboration with the Farafina percussion ensemble from Burkina Faso and the dark, hip-hop tinged 1990 release City. Among his ‘90s projects were the “Million Dollar Hotel” score (which featured some collaboration with U2’s Bono) and the distinct 1999 album Fascinoma teaming him with guitarist Ry Cooder (who also produced), Indian bansuri player Ronu Majumdar and pianist Jacky Terrason. Along the way he also played on recording by Bjork, Baaba Maal, Ani di Franco and Cuban star Ibrahim Ferrer, scored several more stage pieces (Peter Sellars Zangezi) and composed the theme for the TV series “The Practice,”

Maarifa Street marked his return to his own albums after a short break, and May 2008 saw the Norwich Cathedral premiere of In Tsegihi, a choral work for 100 voices and chamber group.

Summing up Hassell’s music is a losing proposition. It’s too vast and too distinctive. But Wim Wenders hit it on the mark when he succinctly exclaimed: “What a beautiful atmosphere he makes.”