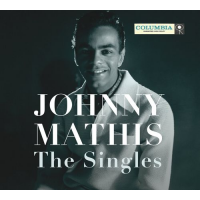 For some reason, when talk turns to male pop singers of the 1950s and '60s, Johnny Mathis is almost always skipped over. There's plenty of chatter on the merits of Frank Sinatra, Nat King Cole, Tony Bennett, Sammy Davis Jr., Andy Williams and others but few words in praise of Mathis. In fact, one could argue that he's nearly forgotten today. Perhaps it's because he didn't record in the jazz-swing tradition. Or perhaps his renditions were too sweet and sincere. Or perhaps he wasn't as visible as white singers in the late 1950s. Fortunately, Sony has just released Johnny Mathis: The Singles, a fabulous four-CD set featuring 87 singles that Mathis recorded for Columbia between 1956 and 1981. The box should help rekindle Mathis's reputation among pop fans and remind us all how dominant he was in his prime.

Mathis could certainly use the love. On Monday night, his home in the Hollywood Hills burned to the ground. The singer learned of the blaze and destruction when he returned to Los Angeles on Tuesday following a concert performance in Cleveland. The fire's cause has not yet been determined. Mathis, 80, was quoted as saying, “I'm OK, nobody got hurt—that's always important. We can always replace things." He had lived there for the past 56 years, and few items were salvaged from the charred remains. So sad.

Soon after his birth in Gilmer, Texas, in 1935, Mathis and his parents and six siblings moved to San Francisco, where he began voice lessons at 13. A star athlete, he attended San Francisco State University and planned on becoming an English and physical education teacher. But while singing with a jazz sextet at the city's Black Hawk club, the night spot's co-founder loved what she heard and became his manager, persuading a vacationing George Avakian, Columbia's director of pop a&r, to see him perform. After the set at the 440 Club, George wired Columbia in New York for a contract.

Mathis is admittedly an acquired taste. His approach tends to be lush and romantic, a product of Columbia's pop machine of the period. And yet many of his renditions of songs still managed to become definitive versions, which is quite an accomplishment. His singles recall a time when pop was pleasant and innocent, providing a sense of comfort and relief rather than a stimulating dance beat. Teens made out to Johnny Mathis' singles on the radio while adults tuned in as they leafed through Life magazine in their living rooms or while unwinding after work with a drink. Mathis's singles still have that narcotic quality.

Surprisingly, most of the material on this new set still hold up. The long list of gems includes Wonderful! Wonderful!, When Sunny Gets Blue, It's Not for Me to Say, Chances Are, A Certain Smile, Call Me, Very Much in Love, Small World, Someone and so many others. Mathis made them all his own through his seductive, shimmering vibrato and honey tones. He also could slide effortlessly from the lower register to the upper levels, as if offering an ecstatic plea. Mathis also had a lovely way of curling around a song and petting it into submission. As for the many arranger-conductors who worked with Mathis on these dates, Ray Ellis and Glen Osser were exceptional.

Even with four CDs, this box isn't complete by a mile, nor does it purport to be. For example, Mathis's small-group jazz sessions in 1956 aren't here. These ensembles featured Art Farmer, Danny Bank, Hal McKusick, Bernie Glow, Eddie Costa and other top jazz artists of the era. It also skips the Gil Evans-arranged session in '56. But what we do have in this box is rich evidence of Mathis's passion and conviction, his tasteful voicing and his perfect execution. It's pop at its best, without the novelty numbers or gimmickry of swing.

Coda: Based on the set's liner notes, it looks like Sony will be releasing the Johnny Mathis Complete Album Collection next year. I can't wait.

Here's The Flame of Love with Glenn Osser in 1959.

Here's There You Are with Ray Ellis in 1958. Dig what Mathis does with his voice on this one...

And here's Small World from Gypsy with Glenn Osser in 1959...