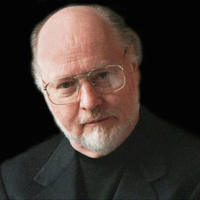 slideshow
If you intended to become a jazz musician in the 1950s, “John Williams" was probably not the most ideal name to go with. By my count, there were eight during this time period. This doesn't include several John Williams with middle initials and others known as Johnny Williams. Perhaps the best known of the bunch today is John T. Williams, also known as John Towner Williams, the movie-score arranger, composer and conductor who orchestrated Superman and Star Wars among many other films.

Back in the late 1950s and early '60s, Williams was known as Johnny Williams and arranged and conducted several West Coast jazz-pop albums, including Rhythm in Motion in April and May 1961 and So Nice! with vocalist Johnny Desmond in February 1958. Both albums have a lot going on in terms of instrumentation, which makes for terrific listening.

Both are jazz-pop albums, but they are still a joy to hear, since there's so much going on and Williams understood even then how to juxtapose heavy heat with delicate passages. The result is Henry Mancini meets Sauter-Finegan. What's exciting is how wide Williams scored and how cinematic songbook standards wind up sounding.

The second album also features engaging arrangements by Williams and Bill Holman behind a warm-voiced swinging  Desmond, who was probably best known as the vocalist in Glenn Miller's Army Air Force Band. He also had a #3 hit with The Yellow Rose of Texas in 1955. Here, he has a smooth baritone, and his band experience gave him solid power in the note-holding department.

JazzWax tracks: You'll find both Rhythm in Motion and So Nice! (Fresh Sound) here. The album comes with three wonderful bonus tracks: Tuesday's Theme (from Williams' score for the film Bachelor Flat); The Black Knight (from his score for the early '60s Checkmate TV series) and Augie's Great Piano (a 1963 showcase for Williams' piano playing).

JazzWax clips: Here are two clips from Rhythm in Motion and one from So Nice! with Johnny Desmond:

Here's Put on a Happy Face.

Here's Life Is Just a Bowl of Cherries.

And here's My Happy Time.