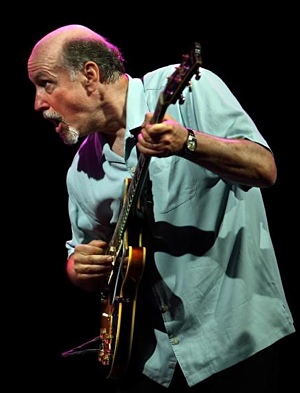 slideshow
John Scofield and the Piety Street Band, with Mr. Scofield, right, on guitar, and clockwise, the pianist Jon Cleary, the bassist George Porter Jr. and the drummer Ricky Fataar at B. B. King Blues Club & Grill.

Groove has always been an essential element for the jazz guitarist John Scofield, expressing itself in ways either subtle or obvious, depending on the setting. Piety Street (Emarcy), released last week, falls in the obvious category, with a fortunate twist: its Mr. Scofields old-time gospel album, recorded in New Orleans with a band drawn mainly from that citys robust R&B scene. Its a basic concept, and it makes all kinds of sense.

The same could be said of Mr. Scofields staunchly exuberant show at B. B. King Blues Club & Grill on Sunday night. Joined by the core players from the album the pianist Jon Cleary, the bassist George Porter Jr. and the drummer Ricky Fataar he played the greater share of its songs, achieving the proper blend of grace and grit. He didnt sound like a visitor in the realm. He sounded at home and happy to be there.

And crucially, he seemed aware of both the musics needs and its potential limitations. Instead of navigating fast-moving streams of rhythm and harmony, as in his post-bop bands, he was leaning on a stable firmament. So he dug in deep, often parceling his notes into flinty riffs. When he did let loose with a digressive chord or a ribbon of arpeggios, it was usually in the heat of full-group catharsis.

John Scofield and the band will perform this weekend in Santa Cruz, Calif.; San Francisco; and Minneapolis.