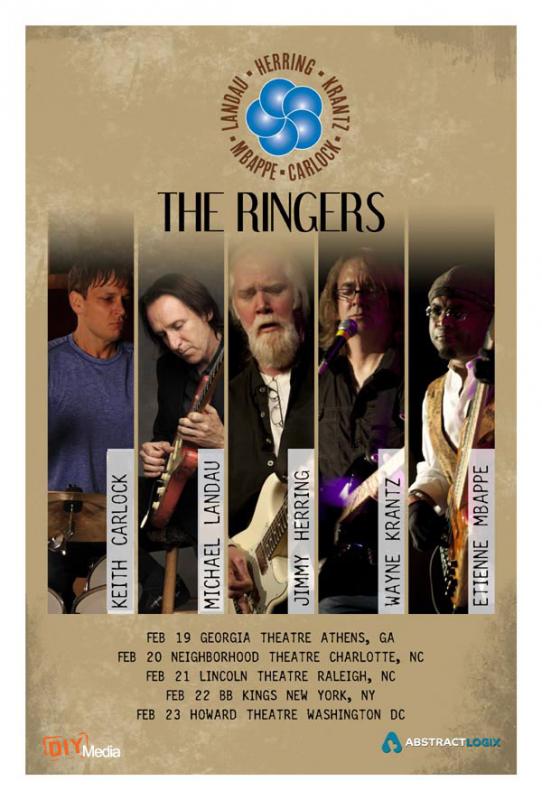 This super-group of talent, with such varying backgrounds, brings together 5 different genres; Rock, Funk, Blues, Jazz and African. They will be starting a very limited, exclusive tour on February 19th in Athens, GA before hitting Charlotte, Raleigh, New York and concluding on February 23rd in Washington, DC.

Jimmy Herring, as the founding member of The Aquarium Rescue Unit, Project Z and Jazz is Dead, in addition to playing with everyone from The Allman Brothers Band, The Grateful Dead to Phil Lesh and Friends, and Béla Fleck, has made his indelible impact on the music world. He currently serves as the lead guitarist for the very popular American Band, Widespread Panic and released his second solo album, Subject To Change Without Notice, this past August 21st

Wayne Krantz released his tenth album, Howie 61, this past April to glowing critical praise. Krantz has played with Randy Brecker, Leni Stern and Steely Dan, among others. Through a succession of highly lauded solo recordings, Krantz has continuously evolved as an artist - pushing himself in new and exciting directions. Revered for his forward-thinking approach to improvisation (brilliantly documented in his 2004 book An Improviser’s OS), Krantz has fearlessly branched into new areas, while consistently skirting the edges of jazz, rock and fusion.

Michael Landau is a prolific session musician and guitarist who has played on a large number of albums since the early 1980s with artists as varied as Joni Mitchell, Seal, Michael Jackson, James Taylor, Richard Marx, Steve Perry, Pink Floyd and Miles Davis. In addition to his session work, Landau has also fronted several bands including Raging Honkies and Burning Water.

Bassist Etienne Mbappe is best known for his years with the Zawinul Syndicate. In the 80’s he was the masterpiece of the jazz fusion band Ultramarine which incorporated jazz with elements of African and Caribbean influences. He also played with Ray Charles on his last album and is currently a member of John McLaughlin’s 4th Dimension.

Listen to Alan Bryson's audio interview with the band members.