SOURCE: ALL ABOUT JAZZ PUBLICITY
November 25, 2008
Sign in to view read count 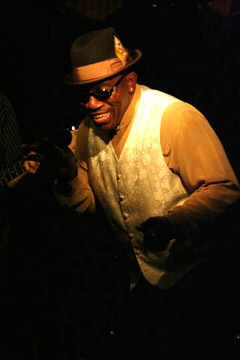 For many, growing up in someone else's shadow is daunting, particularly when that someone is a looming, legendary figure known worldwide. Eclipsed by that someone, a musician may constantly hear comparisons drawn as they try to establish themselves and their career.

This is not the case for John Lee Hooker Jr. Born the son of blues great John Lee Hooker, he acknowledges the significant contribution his father made to music, and knows he was never overshadowed by his father. Rather, he was born to and carries on a legacy that's both broad and wide.

Born in the Motor City, John Lee Hooker Jr. has Delta blues blood running through his Detriot veins. He grew up knowing he was part of this heritage. He demonstrated it as early as eight years of age, when Junior performed on Detroit's WJBK radio station, and by the time he was 16 had played at such prestigious venues as Detroit's Fox Theater, alongside other legendary blues greats such as Jimmy Reed. By the time he was 18, he would join his father to play on Hooker's Sr.'s album Live at Soledad Prison (ABC Records).