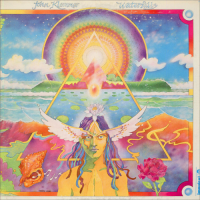 slideshow
Like the Fender Rhodes electric piano, the Echoplex transports me back to the 1970s. First marketed in 1961, the unit allowed notes played on instruments to echo with a ripple effect. The Echoplex is prehistoric technology by today's digital standards. But back in the 1970s, when the unit became popular during jazz's electric fusion era, the Echoplex captured notes on a short built-in tape loop and played them back with a short delay. The tape's adjustable speed governed the echo effect.

The first jazz musician to record with the Echoplex was guitarist Sonny Sharrock on Willie Nelson, a composition left off Miles Davis's Jack Johnson album in February 1970. But the musician who put the device on the map was tenor saxophonist John Klemmer, who used it initially on Eruptions (August 1970) and then to much greater effect in June 1972 on his Waterfalls album, recorded live at the Ash Grove on Melrose Avenue in Los Angeles.

In the early days of psychedelic fusion, the Echoplex allowed the jazz-rock guitar and other instruments with an electric pick-up to create the audio “trails"—simulating the colorful streaks and vibrations that people on LSD saw and felt while observing movement.

In the years that followed, other musicians toyed with the Echoplex. Tom Lord's Jazz Discography shows that the unit was used as recently as 2011. But with the success of Waterfalls (Impulse) in 1972, Klemmer pioneered the Echoplex's reach into electric jazz, giving fusion a San Francisco haze.

I completely forgot about Waterfalls until I was conversing with a source yesterday about the Echoplex. His mention of the device triggered thoughts of Klemmer and his Prelude I and Prelude II tracks on the album. Prelude was the preamble to Waterfall, a spectacular composition of smooth, cascading improvisation. Klemmer's reverberating saxophone lines were trippy, the musical equivalent of an oar dipping into a still lake. The two tracks all but launched the smooth jazz movement.

Re-listening to the album yesterday after so many years, the music reminded me of a vast number of jazz musicians whose albums characterized the fusion movement of the '70s and deserve a re-listen. The list includes Gato Barbieri, Airto, Flora Purim, Grover Washington Jr., Billy Cobham, Grover, George Duke, Joe Farrell, Randy Brecker, Michael Brecker, John Scofield, Roy Ayers and many others. The music rekindles a electric energy that wasn't always successful as jazz but was omnipresent on early FM radio with rock. As they say, you had to be there.

And here's Waterfall I, which followed on the album. Dig the fluidity of Klemmer's saxophone runs...