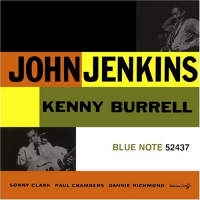 Alto saxophonist John Jenkins never recorded a bad album—as a leader or a sideman. When you hear him, the first person you think of is Jackie McLean. Both had an urgent, insistent edge, particularly on the saxophone's upper register. Remarkably, Jenkins recorded just 11 albums, only three of which were leadership dates. Given how special Jenkins was, his studio output was shockingly scant.

My favorite of the three leadership albums is John Jenkins With Kenny Burrell. Recorded for Blue Note in August 1957, the quintet was spectacular for its combined sound and talent: John Jenkins (as), Sonny Clark (p), Kenny Burrell (g), Paul Chambers (b) and Dannie Richmond (d). This is what I call an “Aladdin's lamp" album—meaning, it's a dream session and I wish I could rub the proverbial lamp for another 10 albums with the same group. Sadly, this is it.

According to Jordi Pujol's notes for a Fresh Sound two-fer, Jenkins was born in Chicago in 1931and gigged with Clifford Jordan in the early '50s. In 1955 and '56, he played with the Art Farmer Quintet when Gigi Gryce was unavailable. He also led his own quartet at Chicago's Bee-Hive. Jenkins moved to New York in 1957 and had a tremendous, compressed run. For some reason, Jenkins dropped out of jazz in 1962 to become a messenger in New York and then a jewelry designer and a sculptor. In 1983, he began playing again, but on street corners. He died in 1993.

Back to my initial point about Jenkins and the consistently high quality of his work. Just look at his extraordinary albums. His first was as a sideman on Teddy Charles's Coolin' for Prestige, a terrific recording, followed by Hank Mobley's Hank on Blue Note and Jackie McLean's Alto Madness on Prestige. Next was Clifford Jordan's Cliff Jordan with Lee Morgan and Curtis Fuller in the front line. Up next were Sahib Shihab's The Jazz We Heard Last Summer with Jordan, and three leadership albums—Jenkins, Jordan & Timmons; John Jenkins With Kenny Burrell and Jazz Eyes. Then came Wilbur Ware's The Chicago Sound with Johnny Griffin.

Did I mention that all of the albums above were recorded in 1957? Absolutely astonishing. What a burst of jazz excellence. Then for some strange reason, Jenkins did not record again until 1990—Play What You Feel, led by Clifford Jordan. It would be Jenkins's last.

Another jazz mystery featuring someone with extraordinary talent who spent just a year proving his value before giving it up. I suspect he detested touring to support albums and decided he'd rather remain in New York as a messenger than spend nights playing three sets in smoke-thick clubs trying to be heard over people talking and glasses clinking.

JazzWax clips: Here's From This Moment On...