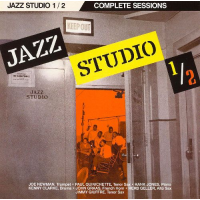 slideshow
What's surprising about the French horn isn't that it became a jazz instrument but that there were so many fine jazz players in the late 1940s and '50s. Among the best were Junior Collins, Julius Watkins, David Amram, John Cave, Willie Ruff, Tony Miranda, Jimmy Buffington and Gunther Schuller. But perhaps the finest of them all was John Graas [pictured]. It's his mellow bellow that stands out in many of the best West Coat jazz orchestras, particularly in bands led by Shorty Rogers and Stan Kenton. He's also among the best of the arranger-composers for small groups the incorporated the horn's sound.

As you know, I have a habit of rummaging around iTunes and Amazon from time to time looking for oddities that have mysteriously slipped into the e-bins. From time to time, I stumble across amazing finds. In some cases, these finds are clearly marked. In other cases, they're either purposefully disguised or done so out of ignorance.

In the case of Graas, I found the mother lode—and it was indeed well hidden.

The download-only album is called John Graas: 100 Frech Horn Jazz Classics. Three big errors, though: First, there are 110 tracks, not 100. Second, only 71 of the tracks feature Graas. And third, 11 of those tracks feature the arrangements of Graas, without Grass playing. The rest of the tracks are from Decca's wonderful Jazz Studio series that was issued from 1953 to 1957. The price for the Graas download is only $19.99 at iTunes, $17.98 at Amazon.

So I downloaded the iTunes version (the fidelity is better). I then spent the next hour untangling and rearranging all of the tracks and assigning dates to them using Tom Lord's Jazz Discography. When I finished, I was blown away. What I saw in front of me was virtually every track from all of Graas' leadership dates, from 1953 to 1958. Plus the complete Jazz Studio 1-6 sessions by Graas and other artists. All for the price of a large pizza pie.

Born in Dubuque, Iowa, in 1924 Graas started on the French horn in high school. After winning a national solo contest, he was awarded a scholarship to the Tanglewood Music School in Massachusetts, where he played under conductor Serge Koussevitzky.

After playing first horn in the Indianapolis Symphony in 1941 and 1942, he joined Claude Thornhill's band before being drafted into the Army in 1943. When he was discharged in 1945, he briefly became a member of the Cleveland Symphony. But he already detested how symphony conductors imposed their interpretations on an instrument he felt he knew cold.

He spent the late 1940s in Tex Beneke's band and Stan Kenton's Innovations Orchestra of 1949 and 1950. Graas remained in Hollywood, recording regularly on a range of Capitol and MGM sessions as well as with Kenton and Rogers.

Graas studied with Lennie Tristano, Shorty Rogers and  Wesley La Violette under the G.I. Bill. Throughout the '50s, Graas worked steadily in the studios and was a prolific composer and arranger. His leadership dates are remarkable for their spirit, the power of his horn (which always emitted a “call to the hunt" sound), and the fluidity of his improvised ideas on what is a notoriously difficult instrument.

If you download this album at iTunes or Amazon, I'd be happy to send you a free PDF I made of the tracks listed in chronological order with the original albums and month and year they were recorded. I don't make a dime off of your download. I'm just a generous sort, and this PDF should help you move the tracks around in your iTunes folder pretty quickly.

JazzWax clip: Here's John Graas' on a Shorty Rogers and His Giants date from March 1953. The first track is Rogers' Coup de Graas, featuring dueling solos by Bob Cooper and Jimmy Giuffre, followed by Rogers' Infinity Promenade. These tracks aren't on the album, but they're among my favorite early '50s West Coast jazz arrangements and too good not to share...