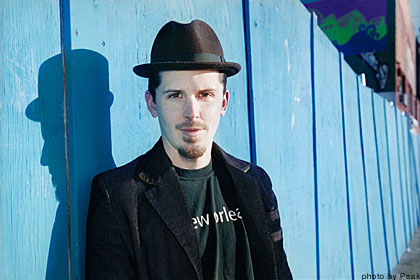 To Be Released FEBRUARY 23 On OBLIQSOUND

Brooklyn, NY -- Brooklyn saxophonist John Ellis is gearing up for a busy 2010. On February 23, ObliqSound will release Puppet Mischief, the second album with his New Orleans-based band Double-Wide, which in addition to Ellis features Brian Coogan on organ, Matt Perrine on sousaphone and Jason Marsalis on drums, plus special guests Gregoire Maret on harmonica and Alan Ferber on trombone. The recording continues the former New Orleanian's love affair with the Big Easy, drawing inspiration from the rich vein of music the city has given the world, while also taking cues, in Ellis' own words, from “carnivals, state fairs, children laughing, clowns and dancing."

The highlights of Puppet Mischief begin from its very first funky moments. The leadoff track, “Okra & Tomatoes," takes its title from a phrase that represents life's perfect pairings. That's followed by “Fauxfessor," a tightly synced, off-kilter New Orleans romp full of surprising twists. The elegiac “Dewey Dah" displays each instrument's individual colorings, particularly Perrine's sousaphone, and reaffirms Ellis' penchant for compositions that are never static, always morphing. Among the album's other standouts are the wild, teasing title track, featuring a stunning harmonica solo by Maret, and the back-to-back “Carousel" and “Dubinland Carnival." The former, which Ellis calls a “wistful circus tune," takes on a bluesy patina and incorporates several dramatic transitions, while its companion piece, which Ellis likens to the feel of a Fellini film, features an epic sax-trombone conversation and some of Marsalis' most fired-up drumming of the set. “Chorale" speaks for itself -- written originally with string quartet in mind, it instead became a beautiful showcase for the four horns. “Hroes de Accin" is Ellis' idea of soundtrack music for a Spanish cartoon crime-fighting hero while the album's closing track, “This Too Shall Pass," is the perfect sendoff, a calming, almost whimsical paean to the acceptance of flux as the one constant in life.

The release of Puppet Mischief follows up one of the busiest years in Ellis' career, one that saw him accompanying a diverse array of musicians ranging from Sting to Mos Def to the Cuban drummer Ignacio Berroa, touring Europe with the John Patitucci Trio and, most significantly, the debut of The Ice Siren, Ellis' hour-long through-composed narrative composition for string quartet, tuba, percussion, guitar, vibes, winds and two singers. The piece, a collaborative effort with playwright Andy Bragen, debuted at New York City's Jazz Gallery in May 2009.

Ellis, now 35, has never been an artist who stays in one artistic place very long. Born in North Carolina, he took piano lessons as a child, soon switched to clarinet, and first became seriously drawn to music when he heard the music of legendary ragtime composer Scott Joplin. After moving to New Orleans, Ellis' jazz chops improved radically as he gigged with the likes of Ellis Marsalis and Walter Payton. After three years in the Big Easy, he went north to New York City, graduating from the New School and settling into the city's thriving jazz scene. Along the way, Ellis spent six years as a member of jazz guitarist Charlie Hunter's group, cutting four albums with them while also developing his own sound. He cut his debut as a leader, The Language of Love, in 1996, then didn't record under his own name again until 2002, when he released the critically acclaimed Roots, Branches and Leaves. That was followed by One Foot in the Swamp (2005), By a Thread (2006), and his first with Double-Wide, Dance Like There's No Tomorrow (2008).

John Ellis & Double-Wide will perform throughout 2010, including a January residency at Snug Harbor in New Orleans. Upcoming winter dates include: