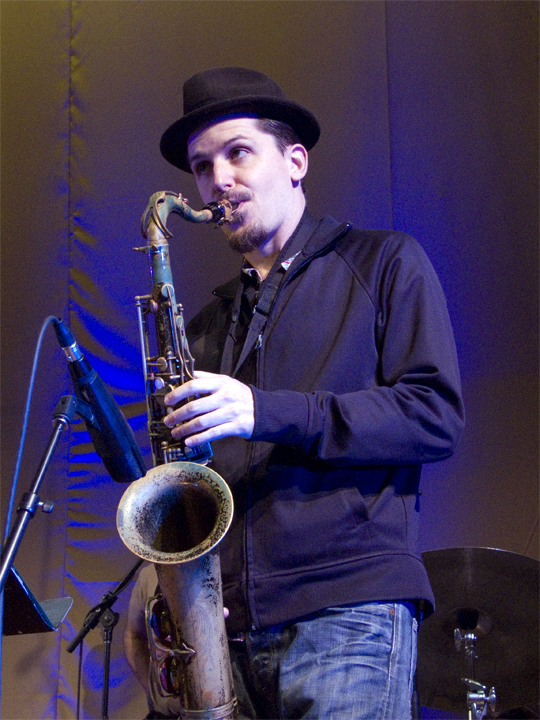 slideshow
John Ellis & Andy Bragen Present The CD Release Celebration for MOBRO And the Official Launch of Ellis' New Label, Parade Light Records, May 30 & 31 at The Jazz Gallery, one set only @ 9:00 PM

Saxophonist/composer John Ellis is proud to announce the NYC CD Release Celebration for MOBRO, and the official launch of his new label, Parade Light Records (distributed by RED) this Friday and Saturday, May 30 & 31 at The Jazz Gallery! One set only at 9:00 PM.

MOBRO is Ellis' and librettist/playwright Andy Bragen's seventy-five-minute through-composed piece, for nine musicians and four singers, which was commissioned and created at one of NYC finest jazz venues, The Jazz Gallery, in April 2011. MOBRO marks Ellis and Bragen's third collaboration (the others being Dreamscapes and The Ice Siren, commissioned by the Gallery in 2007 and 2008, respectively).

MOBRO was inspired by the intriguing 1987 journey of a garbage barge of the same name that became a national news headline, sparking intense interest in, and action on, a multitude of environmental issues. Ellis and Bragen composed, work-shopped, rehearsed and performed Mobro at the Jazz Gallery in April 2011 (to sold out audiences), making use of the space on a prolonged basis, not only for the performance, but also as an integral part of their creative process. The work was commissioned by The Jazz Gallery as part of its 2011 Residency Commissioning Series, which was supported by grants from the Jerome Foundation and the New York City Department of Cultural Affairs. It was developed with additional support from The Playwrights' Center, Minneapolis, MN in partnership with the Network for Ensemble Theaters. This epic work enjoyed a second staging at The Jazz Gallery over four nights in December of 2011.

Ellis and Bragen's MOBRO uses the historical journey of the Mobro 4000 as a thematic launching point, examining issues of what we consume, what we waste, and what we reject. However, the environmental issues are primarily secondary; the historical journey of the MOBRO is used as metaphor: this is an epic quest told through the eyes of the garbage - a story of yearning, of escalating rejections, of self-knowledge, and ultimately of redemption.

After receiving the commission, Ellis and Bragen spent several months researching the historical journey and drafting a twelve part narrative super-structure that provided the framework for the piece. Ellis selected musicians for their gifts at communicating the widest range of emotion, and then wrote with their individual temperaments in mind. Conceived of as one continuous seventy-five minute work, the transitions are of critical importance; events flow into each other in surprising ways and the widest palate of color and tension is used to pull the listener into another world. In order to appreciate the vision as intended, MOBRO should ideally be listened to in one uninterrupted sitting.

More on Mobro: The Mobro 4000 was carrying the trash no one wanted; refuse from an overflowing city that sailed the seas for five months and 6,000 miles. Denied port repeatedly, the barge's contents were viewed as hazardous and infectious. This “Flying Dutchman" of garbage barges returned home close to twenty five years ago, but the questions it raises about what we consume, what we waste, and what we reject are still urgent and relevant. The odyssey of our trash may also serve as a metaphorical microcosm for western society, with a particular focus on those that we expel or deny.

Ellis and Bragen use as a thematic launching point the journey of the infamous New York garbage barge which hauled over 3,000 tons of trash from Islip, New York to North Carolina in March 1987, then down to New Orleans, Mexico, Belize and ultimately back to Brooklyn where the trash was finally incinerated and hauled back, as ash, to where it started: Islip. This new work is a narrative chamber piece with song, jazz compositions and jazz improvisation. The musical ensemble consists of nine musicians and four singers. The piece also features sound design by Roberto Carlos Lange.

Bragen explains further: “There is a strong story behind this piece: the journey of the Mobro 4000. We've taken the real story, and re-imagined it as a kind of ODYSSEY type voyage, far out into the world, and ultimately back home, to be burned. We gave the trash a voice, and in a way, the trash stands in for all that we throw away and reject, all that we look past. The piece has a great emotional scope, and there's something about a long sea journey that allowed us to find the epic nature of it all."

Ellis adds: “I think it has the potential to resonate on a lot of different levels, including a global warming/consciousness of waste level. It's a pretty intense rejection story, but it also has some comic relief. It really does feel like an amazingly satisfying ride."

John Ellis is widely recognized as one of New York's premiere tenor saxophone voices. A sideman to artists as diverse as bass icon John Patitucci, organ legend Dr. Lonnie Smith, and MacArthur Fellow Miguel Zenon, John has performed extensively around the world for the last 20 years. With more than 100 album credits as a sideman, John can be heard with artists as wide ranging as Charlie Hunter, Robert Glasper, Darcy James Argue, Edward Simon, and Sting. John was the 2nd place winner of the prestigious Thelonious Monk Saxophone Competition in 2002, was the recipient of three composition grants through The Jazz Gallery for the creation of new work ("Dreamscapes", “The Ice Siren", and “MOBRO") and was selected as the 2014 Make Jazz Fellow by the 18th Street Arts Center in Santa Monica. John has released seven albums as a leader, two of those featuring his wildly popular New Orleans-centered band Double-Wide, which has toured extensively and was featured on the Main Stage of the 2012 Newport Jazz Festival.

Andy Bragen's honors include a Workspace Residency and a Process Space Residency with the Lower Manhattan Cultural Council, the Clubbed Thumb Biennial Commission, and a Jerome Fellowship. His play for one actor This is My Office was produced off-Broadway this past autumn by The Play Company. Other plays and translations have been seen and heard at numerous theatres, including PS122, Queens Theatre in the Park, Brown/Trinity Playwrights Rep, and Soho Rep. He has an MFA from Brown University and is a member of New Dramatists.