John Clayton and Jeff Hamilton - Rhythm is Their Business 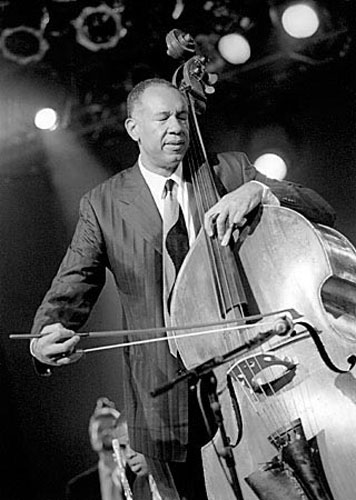 slideshow
Rhythm is their business
John Clayton and Jeff Hamilton keep the heart of the big band beating.

For 25 years, bassist John Clayton and drummer Jeff Hamilton have formed the back line of the Clayton-Hamilton Jazz Orchestra. Founded in 1985 and co-led by Clayton's saxophone-playing brother Jeff Clayton, the big band has recorded a handful of stellar CDs and served as the in-residence ensemble for the Hollywood Bowl Jazz Series from 1999 to 2001.

Clayton, 57, is an esteemed educator; co-leads The Clayton Brothers with Jeff Clayton; and is often the arranger of choice for producers like Quincy Jones and Tommy LiPuma. He and Hamilton both appear on guitarist Graham Dechter's new CD, Right on Time, also released on Capri.

The ace rhythm section plays at the University of Miami on Oct. 29 with UM's Frost School of Music dean, pianist Shelly Berg, plus other faculty members. On Oct. 30, Clayton and Hamilton play with the Frost Concert Jazz Band and the Henry Mancini Institute Orchestra to celebrate the institute's relocation to UM. Both men recently talked about the forthcoming experience, as well as looked back on their remarkable careers.

After you guys played together with pianist Monty Alexander (1975-1977), you both ended up with big bands (Hamilton with Woody Herman; Clayton with Count Basie). Was that foreshadowing?

JC: If so, it was an unconscious move. But Jeff and I had talked about how fun it would be to put together a big band since we studied together at Indiana University, when we also played together in a version of the Tommy Dorsey Big Band.

JH: John and I have had a common love for big bands, like the Thad Jones/Mel Lewis Orchestra and Duke Ellington's bands, ever since college. After playing with Monty and Basie, John moved to Holland for a few years, and I ended up in Los Angeles. But John was writing more while he was in Holland, so we got more serious about forming a big band once he moved to L.A.

What qualities did you find in one another that made you want to undergo the financial perils of a big band together?

JC: Jeff is one of my favorite drummers, and definitely my favorite big-band drummer. And with us, it all comes back to those two words the music.

JH: Having listened to Oscar Peterson records with Ray Brown on bass, I always heard similar great qualities in John's playing, and even more so after he and Ray became associated with each other. And John's writing has always been creative and swinging, and very much in sync with my style of playing.

Have either of you worked with pianist and Frost School dean Shelly Berg?

JH: I did, when he was working in California [as a professor and Chair of Jazz Studies at the Thornton School of Music at the University of Southern California, 1991-2007], and I enjoyed his energy very much. He's become a dear friend.

JC: I've played with Shelly many times. He's one of my favorite pianists to play with.

What kind of material will you be playing?

JH: At this point, I honestly don't know! The first night will be with Shelly and the faculty, and the second is likely to be some of John's charts. We only have a two-hour rehearsal before the orchestra show the second night, so we'll be looking at some charts on stage. I'll wear my reading glasses.

JC: I've talked to Shelly about this. We'll certainly do some things from my book, including some of Jeff's favorites, like my arrangement of “Back Home in Indiana" [composed by James F. Hanley and Ballard MacDonald, and recorded by the likes of Louis Armstrong and Nat King Cole]. Other material will be designed to showcase the students, and make sure they have fun.

What does it take to keep a big band together during a 21st-century recession?

JC: At this point, it really is all about familial commitment. We had a rehearsal last week, and while we took care of business, it also involved a lot of smiles, laughs and camaraderie.

JH: For the orchestra at Lincoln Center, it's great financial support, something we also had at the Hollywood Bowl. But for us now, it's a feeling of family. That, and the Duke Ellington ideal of the band members composing the material so that only that band sounds like it knows how to play the stuff correctly!