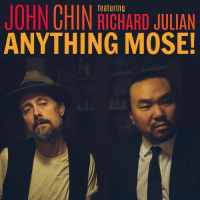 slideshow
I loved interviewing pianist Mose Allison for The Wall Street Journal and for JazzWax in 2010. Mose was a singular artist with a wry sense of humor and a rich, home-grown keyboard style who understood rural wisdom and suffering. Mose relocated to New York from Mississippi in the mid-1950s, and by the early 1960s, he had parlayed his piano's bluesy jaggedness and clever, aw-shucks lyric-writing into a soft storm of rural wit, swaggering riffs and howling vocals.

In conversation, Mose was gentle, easygoing and slathered in Southern charm and hip pragmatism. Like Fats Waller, Count Basie, Bud Powell, Thelonious Monk and Donald Fagen, among others, Mose was one of a kind both as a songwriter and a pianist.

So imagine my delight when John Chin: Anything Mose! Featuring Richard Julian (‎Jinsy Music) crossed my desk. The album showcases John's Mose-inspired piano and Richard's guitar and Mose-ian vocals. But John wasn't satisfied to hold this project to a trio. He added horns: Kenyatta Beasley (tp), Stacy Dillard (ss, ts), Pete Rende (pump organ), Matt Pavolka (b) and Dan Rieser (d). To John's credit, it all works without ever departing from Moseville.

The tracks are Your Molecular Structure, Your Mind Is on Vacation, Smashed!, Stop This World, Middle Class White Boy, Parchman Farm, I Don't Worry About a Thing, Seventh Son, Tell Me Something, Monsters of the ID and Was. Ten of the 11 tracks are by Mose, while Seventh Son is by Willie Dixon and was recorded by Mose.

John is an accomplished pianist who has recorded four albums and performs regularly at jazz clubs in Brooklyn, crossing bridges to Manhattan to perform at Carnegie Hall, Jazz at Lincoln Center, the Blue Note and other marquee clubs. Richard is a Brooklyn singer-songwriter and guitarist who has released six albums.

I love this album. John and Richard fully get Mose's art, attack and hipster ethos. What has always fascinated me about Mose is how he cajoled barefoot wisdom and funky jazz to work together. Mose's music sounds simple but it's far from easy. You can't interpret his songs. You have to get into his space and yowl and rock.

Anything Mose! pays tribute to the Southern singer-songwriter and pianist in all his Greenwich Village glory. Hearing this album takes you back to a time when artists and thinkers from around the country relocated to New York and converged in downtown clubs and coffee houses to express their regional individualism and exceptionalism.

Like Mose, John and Richard understand what it means to be outsiders embraced by New York insiders who understand their scene. Mose would have dug Anything Mose! I can hear his drawl reacting: “They're quite good, aren't they? Maybe I should think about taking a few nights off."

JazzWax clips: Here's a mini doc on the project...

Here's Your Mind Is on Vacation...

Bonus: Here's Mose performing I Don't Worry About a Thing...

And here's Mose in the U.K. performing Everybody's Cryin' Mercy...