John Bunch, Pianist with Goodman and Bennett, Dies at 88 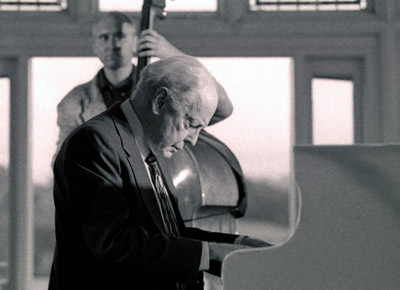 slideshow
John Bunch, a jazz pianist whose elegant style led to prominent sideman posts with Benny Goodman and Tony Bennett as well as an accomplished solo career, died on Tuesday in Manhattan, where he lived. He was 88.

His death, at Roosevelt Hospital, was caused by melanoma, said Cecily Gemmell, his wife and only immediate survivor.

Mr. Bunch was one of a handful of pianists who made a successful transition from swing to bebop in the 1940s, though he never lost his feeling for swing nor his admiration for Teddy Wilson, one of its piano paragons. His main outlet in recent years was a trio called New York Swing, with the guitarist Bucky Pizzarelli and the bassist Jay Leonhart, which played regularly in New York and Europe, releasing albums on different record labels.

Born in Tipton, Ind., on Dec. 1, 1921, Mr. Bunch caught the jazz bug early, idealizing the piano sound of Fats Waller. He studied with George Johnson, a pianist of Walleresque style and local renown, before coming to favor the smoother approach of Wilson, who played with Goodman. By age 16, Mr. Bunch was hitching rides to another town, to sit in with musicians at the Black Elks lodge. He was a working musician in his own right by the outbreak of World War II.