SOURCE: ALL ABOUT JAZZ PUBLICITY
October 11, 2008
Sign in to view read count 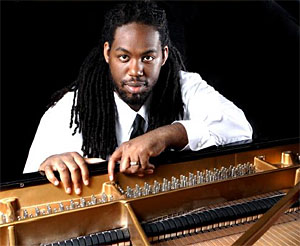 Joel Holmes is an honest to goodness jazz piano prodigy. Some of us are convinced that he was playing piano in a previous life, but his official bio says that he began teaching himself tunes by ear when he was 4. His family moved to Baltimore from Virginia, so he could attend the Baltimore School for the Arts. He later attended the acclaimed Peabody Conservatory of Music at John Hopkins University, and graduated with a Bachelor of Arts in Jazz Performance. He gained popularity with his fellow students playing impressive performances at various festivals and venues, and he is a particular favorite accompanist among area singers.

At 25, Joel composes his own style of music blending an array of traditional and contemporary jazz, gospel, R&B, soul, hip-hop, neo soul, funk, classical and pop. He says of his compositions, “My music is a direct expression of musical influences, spiritual freedom and personal interpretation.” In addition, he plays a repertoire of over three hundred well-known tunes He has opened for The Temptations, The Manhattans, Tonex, Regina Bell and Phil Perry. Joel’s accolades include a gold medal in the Act-so Competition of the NAACP, a silver medal in the Local and National Levels, an honorable mention in the John Lennon Songwriting Competition, a finalist in the 5th annual Independent Music Awards, a recipient of the Maryland State Arts Council Grant, and an honorable mention in the Vh1 song of the year awards.

Because of his increasing popularity, as a pianist, accompanist and composer, Joel is touring extensively throughout the East Coast, and now world-wide. This past summer, Joel joined the touring band of Grammy-nominated jazz vocalist Nnenna Freelon. Joel Holmes released his debut album, “Eternal Vision,” in 2004 and released his second CD “African Skies” this year. He teaches music at Univerity of Maryland – Baltimore County and splits his time between Baltimore and New York City.