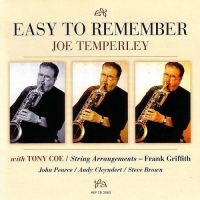 slideshow
Joe Temperley, who died in May at age 86, was a Scottish baritone saxophonist and occasional soprano saxophonist. As a teen, he played in Scotland's Tommy Sampson Orchestra and joined Humphrey Lyttelton's band in London in 1957. In 1965, he left the U.K. for the States, playing in the bands of Woody Herman, Buddy Rich Thad Jones/Mel Lewis  and others in the 1960s and '70s. In 1974, he subbed for Harry Carney in the Duke Ellington Orchestra, which is saying something. Temperley was a nimble swinger who played with passion and loved the basement of the baritone sax.

If you're unfamiliar with Temperley, a good place to start is Easy to Remember (Hep), which was recorded in 2001. Temperley recorded only 18 leadership albums, all for the Scottish Hep label run by Alastair Robertson. On this 13-track album, a majority of the songs are delightful standards. The exceptions are Temperley originals Torpedo and Hielan' Laddie, a solo tribute to his brother, who died in 2000.

Songs like East of the Sun, That Old Feeling and Just Friends are up-tempo platforms for Temperley on baritone and soprano. He's joined by soprano saxophonist and Lyttelton band mate Tony Coe on four tracks. But the songs with strings stand out for me. The string arrangements on The Very Thought of You, Easy to Remember, Warm Valley, Ask Me Know and How Little We Know were written by Frank Griffith, who deftly used a Bird with Strings feel in his scores. Frank's strings aren't there as wallpaper but actively engage the songs and compel Temperley to weave in and out of the orchestral brush, resulting in delightful interplay.

What comes across here is that Temperley loved the sound of his instrument and sharing his passion for  song and swing. Like all great artists, Temperley was a soulful interpreter who clearly wanted the listener to enjoy what he was hearing.