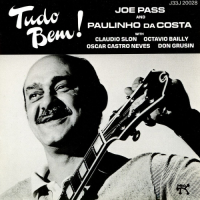 slideshow
In the winter of 1977, guitarist Joe Pass toured Brazil for the first time. When he returned to the U.S., he found himself energized by the understated and sensual samba and bossa nova. Though the bossa nova had been influencing American popular music since the early 1960s, Pass had avoided recording an entire album of Brazilian compositions as a leader. As a sideman, he was on Bud Shank's Brazil! Brazil! Brazil! in 1966 and there were Antonio Carlos Jobim originals on an Oscar Peterson album and several Ella Fitzgerald albums. Corcovado was on his own Resonance album in 1974. But Pass hadn't succumbed to the music, probably because he hadn't been exposed to the culture or embracing quality of the Brazilian people until the Granz-promoted tour.

By 1977, Granz was hard at work building out Pablo, his fifth record label. Founded in '72, Pablo had been named for his close friend, artist Pablo Picasso. Granz was a prodigious art collector, and by the late 1960s he had amassed a significant collection. During this period, he was introduced to the artist and they quickly became fond of one another. They shared a love of jazz improvisation and abstraction.

On occasion, Granz became frustrated by the lack of interest his musicians showed in art, recalling Fitzgerald’s response when invited to meet the great modernist with the words, ‘I’m busy. I’m darning my stockings.' Apparently Picasso roared with laughter when Granz told him and drew a portrait of Fitzgerald. ‘He had no idea what she looked like,’ Granz said, ‘but in his own genius way, the picture was perfect.’ Picasso liked Granz for his offbeat sensibility; he collected unconventionally, and kept up with Picasso’s continually changing styles. He was also one of the few collectors allowed to stop by the artist’s studio without a prior appointment. He sent Picasso shirts from Turnbull & Asser in London, which the artist wore backward as painting smocks. [Photo above of Norman Granz in front of a Picasso by Tad Hershorn; courtesy of Tad Hershorn]

A year after his return from Brazil, Pass assembled a group and recorded Tudo Bem! (or All's Well!). The session took place in Hollywood on May 8, 1978 and featured Don Grusin, the younger brother of Dave Grusin (keyboards), Joe Pass and Oscar Castro-Neves (g), Octavio Bailly (b), Claudio Slon (d) and Paulinho da Costa (perc).

The album is gentle and caressing, and Pass's interpretations are warmly intelligent and innovative. They include definitive renditions of If You Went Away, Tears and Luciana. Paulinho, who received co-billing, is extraordinary on percussion. His rhythmic additions are subtle and beautifully nuanced. [Photo above of Paulinho da Costa]

As Granz wrote in his liner notes, “Pass feels this [album] is by far the warmest and certainly the most melodic album he's ever made." Pass would devote another album to Brazilian music on Whitestone (1985) for Pablo.