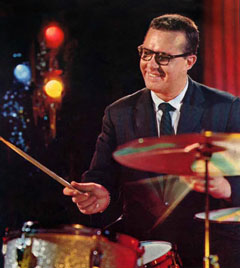 slideshow
Drummer Joe Morello, one of jazz's under-sung heroes, has died. Best known as the rhythmic timekeeper of multiple times in Dave Brubeck's famed quartet, when the quartet made some of its best-known recordings, Morello had lately become an in-demand clinician, teacher and bandleader whose former students numbered Danny Gottlieb, Max Weinberg, Gary Feldman and Jerry Granelli.

Morello suffered from impaired vision from birth, and devoted himself to indoor activities. At six years old he began studying the violin, going on to feature three years later as soloist with the Boston Symphony Orchestra, playing Mendelssohn's Violin Concerto, and again three years later.

At the of age 15 Morello met the violinist Jascha Heifetz and decided that he would never be able to equal Heifetz's “sound," so switched to drumming, first studying with a show drummer named Joe Sefcik and then George Lawrence Stone, author of the noted drum textbook Stick Control for the Snare Drummer.

Stone was so impressed with Morello's ideas that he incorporated them into his next book, Accents & Rebounds, which is dedicated to Morello. Later, Morello studied with Radio City Music Hall percussionist Billy Gladstone.

After a period playing in McPartland's trio, Morello declined invitations to join both Benny Goodman and Tommy Dorsey's band, favoring a temporary two-month tour with the Dave Brubeck Quartet in 1955.

However, Morello remained to play with Brubeck for well over a decade—helping the Brubeck quartet score its biggest hits, including the well-known “Take Five" from the 1959 album Time Out—only departing in 1968.