SOURCE: ALL ABOUT JAZZ @ SPINNER
February 12, 2011
Sign in to view read count 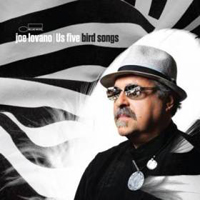 slideshow
The legacy of Charlie Parker is something that every jazz musician has to contend with. As a co-creator of bebop up at Minton's with Dizzy Gillespie, Thelonious Monk, Bud Powell and others, Parker has assured his legacy by the time he died at age 34 in 1956. He was more than just a landmark innovator, as Bird's outsized playing and personality in a community known for great playing and colorful characters makes him legend.

The classic trajectory of his life is also part of his story: how he struggled in obscurity, grew up on the Kansas City scene, arrived unheralded in New York City and became a famous star, and then an infamous drug addict, which led to his eventual downfall. It's a cautionary tale that wasn't headed by enough jazz musicians, who saw drugs as Parker's magic elixir. Today we have saxophonist Joe Lovano to thank for turning the story back to the music with the new album, 'Bird Songs.' The album features Lovano with his great band US5 taking on the music of Parker and celebrating it.

“Most of the cats who have done records of Bird, Sonny Stitt or others were done because they were trying to prove that they could play as good as Bird," Lovano points out. “There was a different attitude about it then. The genius of Charlie Parker stands on its own, man. So I'm trying to come at it as someone who was trying to play his great compositions—those melodies, the harmonic sequences and, of course, how he played on them. But, of course, I can't tell his story; I have to tell my story from my influences that came after him."

One of Lovano's first influences was his father, Tony “Big T" Lovano, who played tenor saxophone. Like so many jazz musicians, Big T was an early teacher and lifelong mentor who first hipped his son to Bird. According to the son, “My dad heard him play and it was all he talked about: His sound in the room; how he played; what he played. Then, of course, my dad was trying to play all that music, so then all my lessons as a kid with my dad about syncopation, melodies, song forms and harmonies were all related to Bird."

The one thing that fueled Lovano's ideas for this album was the fact that we heard Miles Davis do several versions of 'Walkin.” That one piece of music went through so many different changes as Miles switched up his sound. But we don't get to hear that with Bird, who was only on the scene for about 15 years. Oftentimes, jazz fans get one classic recorded version, and that was mostly it until radio broadcasts and live gigs began to be issued posthumously.

“I was thinking about that a lot as I was putting some arrangements together and focusing on a way of playing his compositions that were influenced by others, including his disciples," Lovano says. “How Coltrane played 'Naima.' The idea was to play different compositions, instead of the compositions play you."

The closest his horn comes to a Bird line on the new CD is on the classic 'Koko,' but he does it in a trio with the two drummers from the band. Even here where he plays the same sequence of notes, the reedist changes the tempos and does different things to essentially make the tune his.

For me and many others out there, the crux of US5 is its drummers Otis Brown III and Francisco Mela. Here on 'Koko' it's easy for the listener to hear the differences in the two drummers' approaches and how finely they mesh to create what Lovano calls a “full percussion section." One an African-American from Newark, N.J., and one a Latino from Cuba, the two sounded splendid together on the last album, 2009's 'Folk Art,' and now two years down the line the pair has worked out a real flow. Lovano swears by the sound and vows to keep the two-drummer quintet together for years to come.

Lovano spices things up himself on 'Bird Songs,' too. Known for playing different horns upon occasion, he augments his usual tenor with a straight alto saxophone as well as a G-mezzo soprano saxophone (which is between soprano and alto and makes its Lovano recording debut here) and an Aulechrome. The latter has two horns and reeds and chambers, and one keyboard. It allows Lovano to literally harmonize with himself on the lone original tune, 'Birdyard,' which Lovano calls “a little whirling dervish of a piece."

“It's fun to do," Lovano says of the different horns. “I love to explore these different instruments and try to play different pieces of music on them. The tenor is my main voice, so that's what I play. Other horns, for me, fuel my ideas so I really like to explore them."

There were plenty of ideas floating around 'Bird Songs.' Two biggies present here are a) focus on Parker compositions and b) not to make a Charlie Parker record but to make a record where they played some of his tunes. The idea actually began to germinate last January when US5 had a gig in Barbados. According to Lovano, “We were playing a bunch of tunes from Folk Art, and some Coltrane tunes and some Thelonious, so we were going to do this gig I thought, 'Man, we got to do 'Barbados.” Instead of playing the melody and then swinging on the blues, I made a little arrangement where it was a 10-bar blues instead of a 12-bar blues. We kept it in a Caribbean beat, and, man, it was so fun. So that was a springboard into the music."

Then Blue Note's longtime president Bruce Lundvall heard the Parker tune at the Vanguard during an US5 set and suggested that they run with the idea. Of course picking the tunes was difficult because there were so many classics—'Anthropology,' 'Ornithology,' 'Scrapple from the Apple' aren't covered. And Lovano looked over less-celebrated material, as well—'Passport' made the cut. Amidst all the blues tunes that Bird wrote, the leader opted to combine 'Bloomdido,' 'Bird Feathers' and 'Carving the Bird' into a two-minute collage played by Lovano, bassist Esperanza Spalding and pianist James Weidman without the drummers. Then there is the 12-minute 'Yardbird Suite,' which functions both as the intricate centerpiece of the album and as a homage to Parker and the other jazz gods who have left terra firma.

“I think tune by tune the recording evolved," Lovano says. “As we went through the arrangements for 'Passport' or whatever, and the record just kind of unfolded. I'm thrilled with the way it came out. I didn't know how it was going to come out ahead of time, but I did want to be able to play a through-composed set, from piece to piece. When we played at the Vanguard last time we did it that way, like a suite."