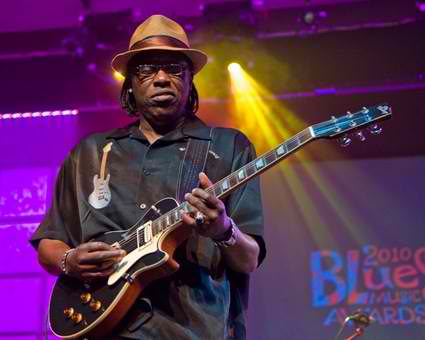 slideshow
Award-winning guitar slinger, passionate vocalist and gifted songwriter Joe Louis Walker, currently celebrating the release of his Alligator Records debut, Hellfire, will perform at Warmdaddy's in Philadelphia on Friday, August 17 and Saturday, August 18, 2012. The Wall Street Journal celebrates Hellfire's “appealing immediacy" and says, “Walker's raspy, powerhouse voice is out front while his stinging guitar cuts through the uncluttered arrangements." Walker has been releasing groundbreaking music since 1986 and has toured — and continues to tour — worldwide. He has won four Blues Music Awards (BMA) and has been nominated for 44 more. Walker's also recorded as a guest with some of the blues world's best-known artists, including appearances on Grammy-winning records by B.B. King and James Cotton. He and his band recently appeared on TBS's Conan to perform the song “Ride All Night" from Hellfire. The New York Times raves, “Walker is a singer with a Cadillac of a voice. He delivers no-nonsense, gutsy blues. His guitar solos are fast, wiry and incisive, moaning with bluesy despair." Rolling Stone simply calls him “ferocious." Concert information is as follows:

Hellfire was produced by songwriter/drummer Tom Hambridge (producer of Buddy Guy's two most recent Grammy-winning CDs, Skin Deep and Living Proof). Walker, who wrote or co-wrote seven of the CD's eleven tracks, says it's the hardest rocking and most deeply soulful album of his career. His blistering blues guitar playing and gospel-tinged vocals effortlessly blend throughout the album.

Joe Louis Walker was born in San Francisco on Christmas Day of 1949. His parents were both from the South and they brought their love of blues with them when they headed west. Joe's dad played blues piano, and his mom played B.B. King records. Walker picked up the guitar as a child, and by the time he was 16 was regularly backing touring blues artists rolling through town. San Francisco's music scene was quickly becoming a melting pot of blues, jazz and psychedelic rock, and Walker was right in the center of it.

As a 16-year-old,Walker was the house guitarist at San Francisco's famed musical playground, The Matrix, where he played with or opened shows for everyone from Lightnin' Hopkins to Jimi Hendrix to Thelonious Monk. He was also a regular at The Fillmore West. The blues legends Walker accompanied shared not only musical knowledge but also their personal wisdom with the teenage up-and-comer. Mississippi Fred McDowell, Ike Turner, Albert King, Freddy King, Robert Lockwood Jr., Lightnin' Hopkins and many others taught, fed, and chastised the youngster. Inspired by what he learned, Walker developed his own fiery, melodic, and always unpredictable guitar attack.

Walker met guitarist Michael Bloomfield in 1968 and the two became fast friends. Bloomfield helped push Walker's blues in a more rock-fueled direction, and he became the single biggest influence on Walker's sound. The two shared an apartment for years and remained close friends until Bloomfield's death in 1981. From 1975 to 1985, Walker performed nothing but gospel music, playing and singing as a member of The Spiritual Corinthians. In 1986, after Walker returned to playing the blues, Hightone Records released his debut CD, Cold Is The Night. Firmly rooted in blues, gospel, R&B and rock, the album caught the attention of music fans around the country.

With each subsequent release, Walker's audience continues to grow, as his touring schedule continues to expand. He's played major European festivals, including Northsea Jazz Festival, Glastonbury, Notodden and Montreux, as well as festivals in Japan, Australia, Taiwan, Ireland, Turkey and Brazil. He's appeared on national television, with performances on Late Night With Conan O'Brien, The Don Imus Show and Later With Jools Holland in the UK.

Fans and critics have been celebrating Walker for years. Blues Revue calls Walker “one of contemporary blues' most dynamic and innovative musicians, releasing consistently exciting music. No matter what he's singing, Walker's approach is soulful, heartfelt and spellbinding." Living Blues says, “His fretwork is indelibly stamped with his own trademark blend of emotional heat and impeccable precision — even at his most flamboyant, Walker sounds as if he's playing ideas, not just notes."