Joe Locke To Release Lay Down My Heart (Blues & Ballads, Volume 1) On May 14 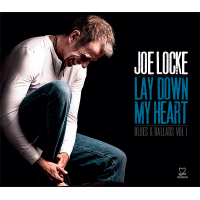 Lay Down My Heart, the third release from the prolific vibraphonist Joe Locke since his signing to Motéma Music in 2012, marks a complete and deliberate contrast from his two previous releases: the small-group outing Signing, his critically lauded 2012 label debut with The Joe Locke Geoffrey Keezer Group, and the large- scale Wish Upon A Star, which was recorded with Lincoln's Symphony Orchestra and was released in January of this year.

Whereas Signing had a contemporary, powerhouse feel, and Wish upon a Star was painted across a large orchestral canvas, this new release is an album of blues and ballads which makes an emotional connection via its utter sincerity, and its ability to deliver lyrical melodies which can literally pluck the strings of one's heart.

In Locke's words, “This music is meant to provide respite for folks who work hard every day and need an opportunity to slow down and be reacquainted with that certain “something" which eludes most of us in the midst of the whirlwind which is modern life. I can't put a name to what that “something" is, but if this music hits its mark, perhaps you will know what to call it.

There is no highbrow concept here, just some songs pulled from a deep well, which will hopefully serve to feed the soul. Most of them (even the ballads) are imbued with the blues, in form or sentiment. I'm grateful to the composers represented here, whose songs have touched my heart, made me wanna dance, or simply put a smile on my face."

On Lay Down My Heart, the acclaimed vibraphonist has surrounded himself with a group of players that bring an incredible range of experience and talents to the mix. His longest-standing collaborator on Lay Down My Heart is bassist David Finck, who Locke has known since their days as fellow students in Rochester, New York. Even before he was out of college, Finck joined Woody Herman and his Thundering Herd. His discography lists more than 100 recordings including platinum and gold-selling records with Rod Stewart, Natalie Cole, and Elton John.

Also on board is pianist/ composer / Gugenheim Fellow and Motéma label-mate Ryan Cohan, who has collaborated with such musicians as Freddie Hubbard, Curtis Fuller, Paquito D'Rivera, Jon Faddis and Kurt Elling, and who has had an extensive collaboration with Ramsey Lewis. Rounding out the quartet is drummer Jaimeo (pronounced jah-mayo) Brown. Brown, whose own project, Transcendence, will be released on Motéma later this year, began working with vibes player Bobby Hutcherson at the age of 19. He has gone on to hold the drum chair in the Charles Mingus Big Band, and also worked with Stevie Wonder, Carlos Santana, Wynton Marsalis and Pharoah Sanders.

The album, the first in a series of Blues and Ballads albums envisioned by Locke,kicks off with the song that introduced R&B legend Bill Withers back in 1971, “Ain't No Sunshine." One of the few blues tunes to achieve super-hit status on the pop charts, it sets the mood for the album. As Locke says, “I just love that tune. The statement is so direct. It's imbued with feeling. 'Ain't No Sunshine': that's the blues."

Locke's composition “Broken Toy" is one of two originals on the album. Its spacious one-chorus melody gives the vibraphone the soloist role, but also leaves room for the piano to intertwine countermelodies. Locke says: “Ryan Cohan, David Finck and Jaimeo Brown had such great generosity when they played this one, they gave so much space". And he pays tribute to the particular, subtle contribution of drummer Brown: “At the beginning of my solo he drops out, and the rest of us have a three-way conversation. I just love what he plays, but also his wonderful sense of when not to play."

Returning to the classics, the band takes on bassist Sam Jones' “Bittersweet," which deviates from the standard twelve bar blues form by including a bridge. “Sam Jones has thrown a curve-ball at the blues", states Locke. The lyrics to the poignant “I Can't Make You Love Me" give the album its title: “Here in the dark, in these final hours / I will lay down my heart and I'll feel the power." On the track, which fully emphasizes the “Ballads" side of the album's repertoire, the four players come together to create an enduring moment of repose and beauty. The subsequent “The Meaning of the Blues," a profound and beautiful song about loss and regret, aptly re- enforces the core vibe of the album.

Frank Foster's “Simone," is presented in a new arrangement by Ryan Cohan. “We had planned a written ending to that one" explains Locke, “but then Ryan just hit an esoteric chord, and we just went with it. It was a totally spontaneous ending that I'm glad we captured in the studio."

“This New October" is the second original piece on the album. Locke explains that he woke up on the morning of October first with a sense of optimism and renewal and captured his positive emotions in song. He says he thought, “If such feelings don't always last, this new piece capturing them will." The song is a straight eighth-note ballad which, unlike any of the album's other tracks, is prefaced by a solo vibraphone introduction.

What more appropriate tune to include on a ‘Blues and Ballads' album than the venerable “Makin' Whoopee," here given a bit of a twist. Locke has given the tune room to breathe, slowed it down. He explains that “the sentiment of the lyrics is a blues sentiment." A quote from Bobby Timmons' swinger “Moanin" also finds its way in here, “I had no idea that was going to happen" says Locke “but it did and I thought it was fun." The album closes with a tip of the hat to the unique, historic collaboration of John Coltrane with Johnny Hartman, “Dedicated to You." “It's less of a blues, not an expression of regret or sadness," says Locke, it's more a declaration of love."

For Locke, the music on Lay Down My Heart represents as much a journey through his past as it marks another move toward the future. “Working on this recording brought me back to my earliest days of music-making in Rochester, NY at the F&S Lounge, Jenks n' Jones, and The Peoples' Club, where the music was part of the social fabric, and the audience and musicians were definitely involved in a two-way conversation. It taught me that jazz is, and should always be, People Music."

Indeed, on his three remarkable releases for Motéma over the past 13 months, Locke has provided abundant ‘People Music' and proved that his abundant talents – whether he's performing in an intimate, small group or with a symphony orchestra – always serve to facilitate a lively musical conversation. Together, Signing, Wish upon a Star and Lay Down My Heart paint an increasingly full portrait of an artist in his prime, a portrait not yet complete and to be supplemented by future releases on the label, a visionary of who dazzles and delights in many colours, styles and themes and leaves us waiting in wonder to see what he will create next.

Joe Locke is widely considered to be one of the major voices of his instrument, long known to be a soloist capable of stunning physical power and broad emotional range. He had already played with Dizzy Gillespie, Pepper Adams and Mongo Santamaria before he was out of high school. His more than 30 CDs as a soloist have solidly established him as the exhilarating composer, band leader and conceptualist that he is considered today. This is in no small part due to his recent projects, the award winning Joe Locke / Geoffrey Keezer Group with Terreon Gully and Mike Pope — “A reminder of the undiluted joys of music making" (Allaboutjazz.com); Storms/Nocturnes, his trio with Geoffrey Keezer and Tim Garland —"a chamber jazz form that truly sizzles with virtuosity and creativity" (Chick Corea); and his Force of Four quartet in which he skilfully combines his young cohorts' compelling talent with his own musical philosophy.

Locke consistently ranks at the top of all critics and readers polls and was presented with three Jazz Journalists Association's Mallet Player of the Year awards.