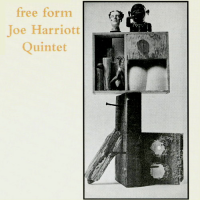 slideshow
Yesterday I posted about Jamaican tenor saxophonist Wilton Gaynair. Today, I want to hip you to Jamaican alto saxophonist Joe Harriott. Like Gaynair, Harriott was educated at the Alpha Boys School in Kingston. And like Gaynair, Harriott moved to Europe, but instead of relocating to Germany, he settled in the U.K. in 1951 and became a Charlie Parker-influenced bebop player. But in the mid-1950s, Harriott began thinking about free-form jazz—music without measures or set melodies.

In Nov. 1960, Harriott recorded Free Form in London for the Jazzland label, with Shake Keane (tp, flhrn), Joe Harriott (as), Pat Smythe (p), Coleridge Goode (b) and Phil Seamen (d). Coming on the heels of Ornette Coleman's initial free jazz recordings in the States, Free Form begs comparison. While Free Form packs the same modal tension as Coleman's Something Else!!! and The Shape of Jazz to Come, it has a more lyrical feel, perhaps because of Harriott's Jamaican background. As a result, I find it less relentless and more palatable to the ear—a perfect starter for those unfamiliar with free jazz.

Straight Lines is a good example. Though it's free jazz, the walking bass line anchors the ear. Calypso also is accessible, with a festive silhouette. And Abstract feels about 10 years ahead of its time.

Suffering from cancer, Harriott was destitute in his last years and died in 1973.

And you'll find all of these albums at Spotify.