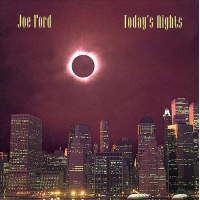 slideshow
Saxophonist Joe Ford has released just one studio album as a leader. Which is surprising considering how superb the recording is. The album is Today's Nights, recorded in New York for Spain's Blue Moon label in March 1993. The line up features Joe Ford (as,sop), Kenny Kirkland (p), Charles Fambrough (b) and Jeff “Tain" Watts (d). Special guests include Darrell Brown and Nasai Abady (d), and Vince Evans (synth). Born in 1947, Ford studied with Jackie McLean, and Frank Foster, among others, and began hi recording career in 1974 playing with Birthright on Free Spirits.

After four albums with McCoy Tyner—Focal Point (1976), The Greeting (1978), Horizon (1979) and 13th House (1980), Ford recorded as a sideman on a long string of dates with different leaders, including additional albums with Tyner. He joined Jerry Gonzalez's Fort Apache Band in 1988. In the late 1990s he led two groups, the Black Art Sax Quartet and a big band called The Thing. In March 2007, Ford was recorded in the Ukraine on Live at Kiev Conservatorium Hall. He's still recording today.

In addition to being a beautiful player on both alto and soprano saxophones, Ford is a gorgeous composer. He wrote Today's Nights, Interior Motive, Buffalo Chips, Blue Muse, Izit and Always Thinking of You. Fambrough wrote Amy's Waltz, Chemical Residue is by Herbie Hancock and My Life With You is by Gerry Eastman. This album is so good, it's somewhat remarkable that Today's Nights hasn't been reissued.

JazzWax tracks: Joe Ford's Today's Nights is out of print. I came across it after Ignatios Alexander emailed me about Ford. When I researched Ford's leadership albums, I discovered Today's Nights. I see there are a couple of CD copies available at eBay.