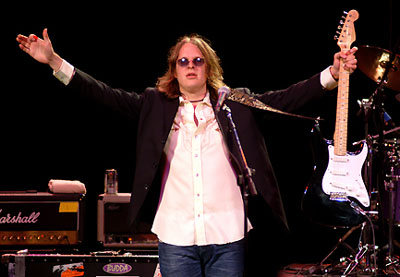 “Bonamassa is a bold talent." - Billboard

Born in upstate New York, Joe Bonamassa started playing guitar, on a short-scale Chiquita, at the age of four. By seven he had graduated to a full-scale model and a year later, he was playing the blues like a veteran. Says Bonamassa, “My father was a guitar dealer and player, so guitars were always around the house and part of my life. They were like chairs or tables, in that they were just as everyday."

At ten, Joe began performing at local venues and at twelve, he was asked to open for B.B. King. The blues legend, after hearing Joe play for the first time, declared, “This kid's potential is unbelievable. He hasn't even begun to scratch the surface. He's one of a kind." King's high regard for Joe would be echoed by other guitar greats the young performer would go on to work with, including Buddy Guy, Danny Gatton, Robert Cray and Stephen Stills.

While still in his teens, Joe met musician Berry Oakley, Jr., and together they put together the group Bloodline. Signed to EMI Records, their self-titled debut CD on EMI produced two chart hits, “Stone Cold Hearted" and “Dixie Peach," both hard-driving fusions of blues, boogie, funk, and southern roadhouse rock. Following initial success, Bloodline eventually disbanded. Joe, realizing that he would need to do more than play guitar, began studying with a vocal coach.

In 2000, Joe finished work on his debut solo CD, A New Day Yesterday. With his newfound vocal confidence, the disc featured appearances by such respected players as Gregg Allman, Rick Derringer, and Leslie West. The CD's producer, legendary Tom Dowd, had, in the course of his 25-year career at Atlantic Records, recorded with such greats as Aretha Franklin, Ray Charles, Eric Clapton, Rod Stewart, John Coltrane, Ornette Coleman, among countless others. Dowd quickly became a Joe fan and friend.

The memorable melodies and potent guitar work of A New Day Yesterday brought to mind the classic blues-based rock of Cream, Lynyrd Skynyrd, the Jeff Beck Group, and the Allman Brothers Band. The CD included outstanding originals such as “Miss You, Hate You" and the slide guitar showcase “Cradle Rock," along with a powerhouse version of the title song “A New Day Yesterday," first recorded by Jethro Tull in 1969. Upon returning from the road in 2002, Bonamassa hooked up with Clif Magness (Avril Lavigne) to record the muscular and sweeping studio disc So, It's Like That, which hit #1 on the Billboard Blues Chart multiple times. With its inspired fusion of classic blues and pop production, So, It's Like That helped expand Bonamassa's already impressive fan base.

To celebrate 2003 “Year of the Blues," Bonamassa released Blues Deluxe, featuring nine cover versions of blues classics along with three originals. For years, fans had asked whether Joe would ever do a classic blues album. So when the So, It's Like tour ended, Bonamassa entered the studio with producer Bob Held and engineer Gary Tole (David Bowie, Jimmy Vaughan, Bon Jovi) and recorded some of his favorite blues covers just to “blow off steam." The resulting masters were so compelling that Bonamassa and his label decided to finish the record and release Blues Deluxe.

Around this time, Joe became involved with “Blues in the Schools," a program developed by the Blues Foundation to help perpetuate the heritage and legacy of blues music to new generation of fans. The lectures take teenage students on a journey, tracing the evolution of blues music, from its birth among the field workers of the Delta during the late 1800's up to the present day. The lectures are followed by a live performance by Bonamassa.

Bonamassa's next CD, Had To Cry Today, continued where Blues Deluxe left off. Mixing original and classic blues, the CD incorporates influences of Chicago, Delta and British blues into something electrifying and wholly unique. From the 40's and 50's music of B.B. King, Muddy Waters and Buddy Guy, to the English invasion of the Yardbirds, Clapton and Cream, Had To Cry Today deftly elaborates on the many faces of one of modern music's most influential genres.

In the summer of 2005, Bonamassa was personally asked by BB King to open for his landmark 80th Birthday Celebration Tour. A few months later in January 2006, Bonamassa, in recognition of efforts in promoting blues music through North America and Europe as well as his efforts with Blues in the Schools, was nominated as the youngest member of The Blues Foundation committee board.

Bonamassa's latest CD, You and Me, is scheduled for a June 6, 2006 release. The new CD marks the debut collaboration of Bonamassa and producer Kevin Shirley (Led Zeppelin, The Black Crowes, Aerosmith, Joe Satriani). Says South African-born Shirley: “When I was approached to work with Joe, I already knew he was an awesome talent, but I also knew I'd want to do something a little different from a straight blues album. There are a lot of very good blues players performing copycat versions of classics. I wanted more of a rock sound, and I wanted Joe to showcase his depth and versatility; his vocals as well as his incredible guitar playing."

A powerful fusion of the “big rock sound" and swampy blues, You and Me gets much of its inspiration from such masters as Peter Green, Jeff Beck, Eric Clapton and John Lee Hooker. Bonamassa delivers all the excitement and power of his electrifying live performances while mixing it up with dynamic music choices; from hard to soft, electric to acoustic, a music roller coaster seldom achieved by recording artists today. Along with his ever- expanding vintage guitar collection, Bonamassa makes his home in Los Angeles.