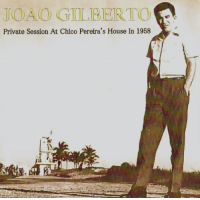 slideshow
Several months ago, I came across a superb album early bossa nova music. It's called João Gilberto: Private Session at Chico Pereira’s House in 1958. The music was recorded a year before Gilberto recorded and released Chega de Saudade in 1959, the album that launched the bossa nova sensation worldwide. The back-story is wonderful: In '58, Roberto Menescal took Gilberto to the home of Chico Pereira, who photographed album covers for Brazil's Odeon Records. According to Ruy Castro's book, Bossa Nova: The Story of the Brazilian Music That Seduced the World, at Pereira's home, Gilberto was urged to take out his guitar and play, which he did. Pereira was so overwhelmed by Gilberto's voice and chord voicings that he stopped Gilberto to put a blank Sony tape reel on his Grundig recorder and set up a microphone. For the next 70 minutes, Gilberto played, sang and talked. The result was 38 tracks and music that would soon be recorded commercially.

When Gilberto finished, Pereira insisted he record a studio album. He urged him to seek out Antonio Carlos Jobim, who was working at the time as a conductor at Odeon. He did and played him the rehearsal tape. The result was Chega de Saudade, on which Gilberto recorded three songs by Jobim and Vinicius De Moraes, three songs by Carlos Lyra and Ronaldo Boscoli, two originals and the rest by several other composers.

I'm not quite sure how this tape surfaced or how it managed to wind up digitized. But Gilberto's soft Chet Baker-y voice, his driving guitar rhythms and bewitching chord voicings provides a fascinating preview of the songs and bossa nova sound that would transform popular music in the U.S., Europe and Japan not to mention Brazil.