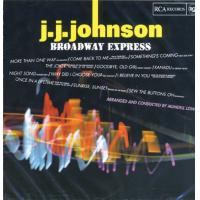 slideshow
Back in the 1960s, jazz guitarist Mundell Lowe was busy. In addition to recording as a leader and sideman, he arranged and conducted sessions for his own band and for others, always with enormous taste. His albums as an arranger, conductor and player included Satan in High Heels (1961), a film score; Hey! This is Kevin Gavin (1962); Jerry Winters Again (1962); Alice Darr (1962); The Happiness of Joe Mooney (1963); The Greatness of Joe Mooney (1963); and two tracks on Peggy Lee's Is That All There Is (1969). Among the best of these nifty recordings was an album for trombonist J.J. Johnson called Broadway Express.

Recorded for RCA in December 1965, Broadway Express was a show-tune followup to J.J.'s Broadway that the trombonist had recorded for Verve in 1963.

The beauty of Mundy's arrangements is that they swung hard, they were airy, and they often featured flutes and interesting instrument combinations. J.J. Johnson was the dean of the post-war jazz trombone and one of the first to master bebop. His firm command of the instrument and his powerful fleshy tone enabled him to dominate as a leader, dating back to the late 1940s. Also in Johnson's favor was his ability to compose and arrange gracefully.

JazzWax clips: Here's I Believe in You from How to Succeed in Business (Without Really Trying). Dig Mundy's arrangement with clarinet, flutes, French horns, oboe and glockenspiel...