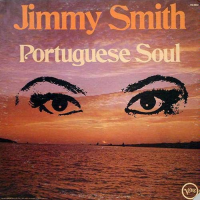 slideshow
One of organist Jimmy Smith's most interesting albums is Portuguese Soul. Recorded for Verve in February 1973, the album remains unknown by many, largely because it was out of print for years. The album wasn't helped by the cover, which has a horror film poster thing going on in the design. Those who do know the album are often surprised to learn that it was arranged by Thad Jones, who conducted a large orchestra that sadly remains uncredited.

As Smith writes in the album's liner notes, “It all started at 4 a.m., Sunday, November 13, 1972, after our segment of the Newport Jazz Festival had just wrapped up our last concert of the three-month European tour, in Cascals, a little town on the outskirts of Lisbon, Portugal. We were packed and the other guys had crashed, but this guy was pacing with all sorts of music twisting my head, going in so many directions. I knew it couldn't be just another tune or two tunes, but a whole damn suite.

“I was rapping on tables, glasses, suitcases—anything that would get near the sounds I heard. I stayed on this 'musical high' for days and when I felt I had it all together, there was no double who the one man was who could musically dissect my brain, hear what was there and get on the same trip, and that was Thad Jones."

The music on the album is fascinating. The recording opens with Don McLean's And I Love You So, which Smith first heard in Rotterdam, the Netherlands. He missed the first verse with his tape recorder and the title but captured enough of it to know he had to record it. Next up is Blap, a 10:53 original that must have come from the banging on tables and glasses. It completes Side 1.

On Side 2, there's a four-minute opening instrumental prologue. Next comes three movements that finish the album. The second movement is by Jones. What's fascinating about this side is that the music is heavily perfumed with Jones's arranging style and a big thrashing band punctuated by Smith's organ throughout. It's also deeply complex and moody music.

What's unfortunate is that the musicians on the date aren't listed. Saxophonist Bill Kirchner, who knew Thad Jones and set in with the Thad Jones/Mel Lewis Band at the Village Vanguard, tells me that Grady Tate played drums and Mel Lewis played percussion. If I have time, I'll reach out to Local 802 to see if they have the session sheets.

JazzWax clip: Here's And I Love Her So...