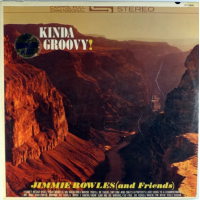 slideshow
Jimmy Rowles was the dean of West Coast jazz pianists. Not only was he a tasty favorite of jazz giants in Los Angeles in the 1940s, including Lee and Lester Young, he was a preeminent recording studio pianist with Swing Era bandleaders, top jazz recording artists and leading vocalists. To give you an idea of how prolific and eclectic a pianist Rowles was, The Jazz Discography lists him on 540 recording sessions, which is a significant number. This doesn't even include his pop recordings or his TV and movie soundtrack work. While you may already be familiar with Rowles and his piano, what you probably don't know is that he recorded a vocal album in 1962 entitled Kinda Groovy!

Rowles moved to Los Angeles in 1940 from Spokane, Wash. His big break came in 1942, when Benny Goodman lost his pianist, Mel Powell, to the World War II draft. Ben Webster recommended Rowles, who joined Goodman for five months before leaving for Woody Herman's band. After Rowles' was drafted, he spent the war with Skinnay Ennis's service band. Interesting, because Rowles' hip, tissue-soft voice can best be described as a cross between Skinnay Ennis and Bob Dorough.

After the war, Rowles worked with Herman, Goodman, Tommy Dorsey, Les Brown, Bob Crosby, Georgie Auld, Jerry Gray and many others big bands until the early 1950s. Then he began playing for TV and the movies, and with jazz ensembles and behind vocalists.

Rowles's gift on the keyboard was a relaxed style that could slip effortlessly between jazz and pop without ever losing its authenticity or character. In fact, jazz artists favored him to give their record dates a bit of easy-going polish. Pop singers wanted him as an accompanist because he gave them a jazz feel. As a result, his piano turned up often on key jazz and pop record dates.

For example, here's Rowles's gorgeous opening on Tony Bennett's Girl Talk in 1966 (boy, do I wish Tony and Rowles had recorded a duet album)...

In October 1962, Rowles was persuaded to record a vocal album. He accompanied himself on piano and was joined by Howard Roberts (g), Max Bennett (b) and Nick Martinis and Shelly Manne (d) on different sessions. The album has never been released digitally and is unknown to most Rowles fans.

The person who lit the album's fuse was Peggy Lee, who heard Rowles sing when they went over arrangements when he was her accompanist in Las Vegas in the early 1960s. Lee passed the word on to Capitol producer Dave Cavanaugh. When Cavanaugh produced an album for another singer using all of the musicians listed above, he asked them to stick around after the session. Cavanaugh told them he wanted to make a test of Rowles's voice. Rowles was taken aback until he heard that Lee had planted the seed.

The test led to three sessions to complete the album. By Rowles's own admission, his voice wasn't the real deal, just pipes that could sketch a tune neatly rather than deliver a robust rendering. But taken together with his piano and this group of studio players, Kinda Groovy! is a remarkably relaxing album, especially with Rowels's piano solos. [Click the image above and enlarge to read by holding down your control button and tapping the + sign on your computer]

Asked who he likes listening to by Rory Guy, the writer of the album's liner notes, Rowles said, “Wayne Shorter." “He's a marvelous player and composer. If I put the needle on one of his records around bedtime, I'm lost. I just can't stop listening. He sails around the room like a kite."

The song choices here are fascinating and loaded with wit. They include Porter's Love Song, recorded by Fats Waller in 1934; Miss Brown to You; the Gershwins' My One and Only; Duke Ellington's Me and You; Mose Allison's Your Mind Is on Vacation, and How Can We Be Wrong, by Howard Dietz and Arthur Schwartz.

JazzWax tracks: If you want Kinda Groovy!, you'll have to go onto eBay for the vinyl.