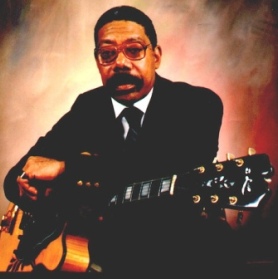 slideshow
Soul-Jazz guitarist Jimmy Ponder was well known to serious jazz lovers for his recordings as a leader and appearances as a sideman on 80 albums. His unique bluesy sound, which incorporated Wes Montgomery's approach of playing octaves with the thumb, has influenced other guitarists.

Ponder's playing was described as aggressive rhythm-and-blues figurations with swift and lucid chromatic bop lines. Jimmy released 21 albums since 1969 as a leader on the Muse, Highnote, Cadet, Explore, and LRC labels. He reached the Billboard Top Jazz Album charts with his best selling releases Ain’t Misbehavin’ at #16 in 2000 and All Things Beautiful at #38 in 1978.

Jimmy Ponder, who was born on May 10th 1946 in Pittsburgh, grew up in the Beltzhoover neighborhood and began playing professional at age 11.

“Live at the Other End by Jimmy Ponder is not only engaging for its entire 55 minutes' running time, it's downright dazzling, and not only in technical acumen—which it certainly is—but in its pure singing musicality....is one of the finest solo jazz guitar records in the canon, period." —Thom Jurek, All Music Guide

“When you count up the years and numbers, few if any authentic jazz guitarists have sustained as long, consistent, fruitful or interesting a recording career as Ponder. His many efforts for the Muse and High Note labels have set high standards for musicality with integrity" —Michael G. Nastos, All Music Guide

“Pittsburgh is a blessed with so many great musicians. Jimmy Ponder continues this great tradition by being one of the finest jazz guitarists in the country." —Tony Mowod producer/jazz host

“One of the great pioneers of the guitar coming out of Pittsburgh — he and George Benson." —Roger Humphries