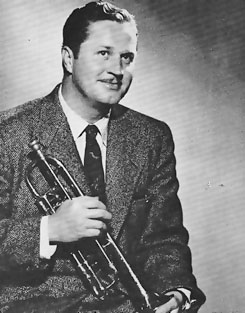 slideshow
This week, Riverwalk Jazz pays tribute to the Chicago jazz cornetist Jimmy McPartland, husband of public radio's Marian McPartland. The couple met in Britain while Jimmy was serving in the armed forces during WWII.

The program is distributed in the US by Public Radio International, on Sirius/XM sattelite radio and can be streamed on- demand from the Riverwalk Jazz website.

Jimmy McPartland played alongside Bix Beiderbecke and Benny Goodman, and is credited as one of the architects of “Chicago Jazz." His playing career spanned six decades.

McPartland was a rough-and-tumble kid from Chicago's West Side where he attended Austin High School in the early 1920s with his brother Dick and classmates Frank Teschemacher, Bud Freeman and Jim Lannigan. They were captivated by the spirited new jazz that was everywhere in Chicago—The New Orleans Rhythm Kings, King Oliver, Louis Armstrong, and the Wolverine Orchestra with Bix Beiderbecke. Inspired to get up their own group, Jimmy became the leader of the “Austin High Gang," as they later became known, and which, at one time or another, included the future jazz stars saxophonist Bud Freeman, pianist Joe Sullivan, drummer Dave Tough, reedman Frank Teschemacher and guitarist Eddie Condon.

In 1924, Jazz Age cornet star Bix Beiderbecke recommended the 17-year-old Jimmy McPartland as his replacement when he left the Wolverines. Arriving at the Cinderella Ballroom in New York to audition for the break of a lifetime, Jimmy recalled, “We finished the rehearsal and I said, 'when am I gonna meet Bix?..'.He came walking toward me and we met in the middle of the dance floor...he said, 'I like you, kid. You sound like me but you don't copy me.'" Before he left town to join the Goldkette Orchestra, Bix bought Jimmy a cornet which he played and treasured for the rest of his life.

McPartland made his first recording with the Wolverines in 1925. Leaving the group a year later, he worked with bandleader Art Kassel before achieving great acclaim with Ben Pollack's Orchestra in the late 1920s in a group with Benny Goodman, Jack Teagarden, and former Austin High Gang member Bud Freeman.

Marian McPartland recalls her husband Jimmy as a gracious and gregarious man, much loved by everyone around him. He was a sportsman, an amateur boxer, a strong swimmer and an expert fly fisherman. Marian has often reminisced of summer days spent fly casting on Pike Lake in Wisconsin at his friend Squirrel Ashcraft's cottage. She says Jimmy took a child-like pleasure in the simple things of life, and notes that his favorite saying was, “Do it gracefully."

Though Marian and Jimmy divorced, the couple remarried in 1991, just two weeks before Jimmy's death.