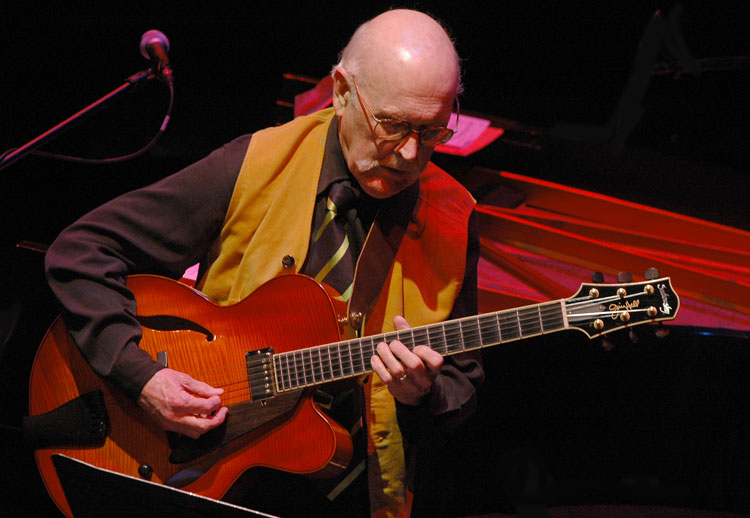 slideshow
Devra Hall Levy informed friends this morning that her father died last night in his sleep at home in New York, six days following his 83rd birthday. In her message, Ms. Levy wrote from Los Angeles, “He was not feeling well, but had not to my knowledge been diagnosed with any particular illness.”

Jim Hall was born in Buffalo, New York, raised in Cleveland and received his formal musical education at the Cleveland Institute of Music. The guitarist performed steadily into his eighties, including a concert atthe 2013 Newport Jazz Festival. Hall’s first major professional notice was in 1955 as a member of the Chico Hamilton Quintet. Later, he had successes with Jimmy Giuffre, Sonny Rollins, Art Farmer and Bob Brookmeyer, collaborated with Paul Desmond, Ron Carter, Bill Evans and George Shearing, and led his own trio.

Hall’s influence extended beyond jazz to virtually all genres of music. His appearance at a guitar shop in Los Angeles in the 1980s drew many of the jazz guitarists in town but also rockers, country pickers and classical acoustic players. In a style that grew out of Charlie Christian’s, he developed daring uses of chords that reflected his knowledge of and love for modern classical composers. Hall once said that Béla Bartok was his hero. A master of the effective use of space in his solos, he was also noted for the intensity of his swing and the lyricism of his melodic lines.

He is a wizard, truly the only contemporary guitarist to be mentioned with Charlie Christian and Django Reinhardt. Over the years, I’ve heard him in playing situations ranging from the Sonny Rollins Quartet in the gloom of McKie’s bar on the Southside of Chicago to the East Room of the White House at Duke Ellington’s 70th birthday party. He has never been less than superb.

Discussing his approach to improvisation, Hall told Juan Rodriguez of The Montreal Gazette in a 2002 interview, “I want a picture in my mind of the way a solo looks as I’m playing it. That way I can keep it from becoming boring— to me or the listeners— and avoid clichés. Here he is not being boring in the mid-1960s playing “Sometime Ago,” with Farmer on flugelhorn, bassist Steve Swallow and drummer Walter Perkins.

At the Marciac festival in France in 2009, Hall played “My Funny Valentine,” a piece he transformed countless times in his career, with Kenny Barron, piano; Scott Colley, bass; and Lewis Nash, drums.

In part because his recordings with Desmond inspired legions of young guitarists, many of them sought him out as a teacher. Interviewing him as I was writing a Desmond biography, I asked Jim if his playing changed as a result of working with Paul.

“Certainly,” he said. “I had more respect for melody. It worked out perfectly for me because I don’t have the amazing chops that a lot guys have, anyway. I realized that playing nice melodies was okay, so that made it a lot easier for me.”

“Could you pass that along to some of the younger players?” I said.

“I do, actually, whenever I’m teaching. I have these students with incredible chops. I try things to get them to slow down. Occasionally, I’ll have them just play on one string like a trombone, or play a mode with three or four notes and develop that through a whole solo, make them more aware of what Paul was aware of, how it becomes an art form and gets away from all that macho b.s.”

After a student improvised a passage overflowing with meaningless technique, Hall told him, “Don’t just do something. Sit there.” The bon mot circulated quickly and became celebrated in the jazz community.

Jim’s wife and collaborator, Jane, wrote “Where Would I Be?” “The Answer is Yes” and other pieces that were in his repertoire for decades. His family life revolved around Jane, their daughter Devra and his dog Django. A familiar sight in their lower Manhattan neighborhood was Django walking Jim. Here is a favorite family portrait.

Thanks to National Public Radio, you can go here to listen to Hall’s complete concert at last summer’s Newport festival with Scott Colley, Lewis Nash and fellow guitarist Julian Lage.