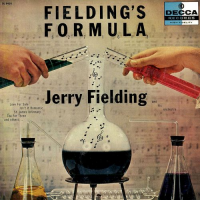 When the 12-inch LP was relatively new in the mid-1950s, jazz labels needed as much content as they could get their hands on to fill production quotas. So they were willing to take chances with artists who had bright ideas and proven track records. After all, even though magnetic tape had dramatically reduced recording overhead, time was still money. An especially fruitful year for these hip small-group and big band recordings was 1956, when many labels dropped the 10-inch album for the 12-inch LP. I've written about these hidden gems from 1956 in the past, like Hal McKusick's Jazz Workshop, John Graas's Jazz Lab  and Don Elliott's A Musical Offering.

Here's another: Jerry Fielding's Fielding's Formula. Recorded for Decca in Los Angeles in September 1956, the band featured four unknown trumpeters, trombonist Joe Howard and another unknown trombonist, Buddy Collette on tenor sax, and another unknown tenor, Hymie Gunkler on alto sax, an unknown baritone sax, John Williams on piano, Red Callender on bass and three unknown percussionists, including a drummer. Lucy Ann Polk is the singer, and Jerry Fielding arranged and conducted. The personnel has holes because the players' names come from Fieldings' liner notes on the back of the album. Unfortunately he focused solely on the soloists and standouts.

Fielding began as a freelance theater arranger in Pittsburgh before working in radio, winding up in Hollywood in the early 1950s to arrange for television. He formed a rehearsal band there and many of his arrangements were recorded on his first album, Jerry Fielding & His Great New Orchestra (Trend) in 1953. But that year, his TV and film career came to a half after he invoked the Fifth Amendment during testimony before the House Un-American Activities Committee for his membership in a writers' group thought to be a communist front.

By default, Fielding concentrated on performing and recording, releasing several solid albums during the 1950s. In 1961, his blacklist ended, and director Otto Preminger used him on Advise and Consent, which included the rare Heart of Mine by Frank Sinatra, a song he recorded only once. Fielding spent the 1960s writing for TV and scored much of the music for The Tim Conway Show. He returned to film in the 1970s, scoring many of Clint Eastwood's movies. Fielding died in 1980 at age 57.

As Fielding's Formula shows, Fielding understood how to swing and write scores that delivered a solid punch. A footnote: When the late Buddy Collette talked about being the first black musician hired for a television show in 1950 (Groucho Marx's You Bet Your Life ), the man who hired him was Jerry Fielding.