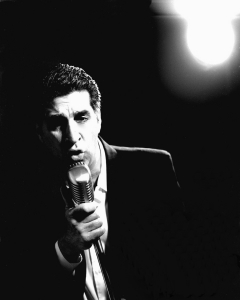 As a follow-up to his most recent successful CD, Destination Moon, Jerry Costanzo has put the finishing touches on his upcoming CD Can't We Be Friends?, scheduled for release on May 9th, 2011. In his appearance at Sip City, Jerry will be joining Jazz veteran Ian Petillo and his Legacy Jazz Band and performing songs from both Can't We Be Friends? and Destination Moon, as well as other standards from the Great American Song Book.

“There's an underlying sense of fun—you want to get up and dance, you want to join the party." —Kyle O'Brien, Jazz Society of Portland

“ [H]ere's a cat that knows how to swing it 50s style and could give Steve Tyrell a few pointers on how to sharpen it up to get his groove back. Costanzo and his swinging pals know how to grab the Vegas vibe that most of us have heard about but never were old enough to really experience. It's not a time piece, just a good time that doesn't try to recreate, but exist in its own place bringing some authenticity along for the ride." &#151Chris Spector, Publisher & Editor, Midwest Record