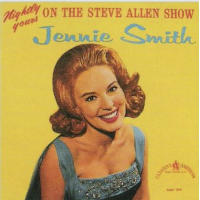 I never bought into the story about singer Jennie Smith and her backstage attempt to let Steve Allen have it with a pair of scissors. The word was that she and Steve were romantically involved while he was married to his second wife, Jayne Meadows, and that scorn led her to try and stab him. There are only two references to the spurious story online (both unsubstantiated), and I could find no mention of the attack in the database of the country's newspapers. If it happened, the police would have been called and the papers would have covered the incident.

Smith was a regular singer on The Steve Allen Show in the early 1960s, when Allen had a stable of full-time guests who appeared on his show five nights a week. Smith's job was to sing a song or two. And she had the voice and presentation for the task, and was adored by TV and club audiences. Smith was something of a cross between the belting sass of Eydie Gormé and the sterling phrasing of Patti Page. Plus, Smith was inventive with the notes she picked mid-song and had a voice with a powerful passing gear. She also was quite a good composer.

Smith recorded just four albums, all of them wonderful. I only wish she had recorded a couple of dozen more. Her song choices were superb, her arrangers were top shelf and she could really swing and hold a note. A consummate pro.

Born in a West Virginia coal-mining town in 1938, Smith was raised on movie musicals at local theaters and started out singing film songs at home. Smith's father was a radio newscaster, and the family eventually moved to Charleston, the state capital, where he landed a better radio job. After high school, Smith traveled to New York to meet a friend of her father's colleague at the Charleston radio station. That friend was arranger Ray Ellis. The meeting led to an impressed Ellis, an RCA audition and a contract for two albums that Ellis scored. Steve Allen heard one of the tracks on the her first album and invited Smith to do a guest shot on his show in New York.

In the late 1950s, Smith worked major clubs with comedians as well as sang on network radio shows. In 1962, after Allen moved The Steve Allen Show to Los Angeles, Allen asked Smith to come out and sing on his show as a regular guest. Smith moved to Los Angeles. After two years, she left the show to appear frequently in Las Vegas. But by the late 1960s, the shift in music tastes and the grind of travel and breaking in new songs began to take a toll. Smith quit the stage and went to work at the General Reinsurance Corp., a property/casualty and life/health reinsurance company now known as Gen Re.

Smith worked for the company for 31 years and retired in the late 1990s. Along the way she met Arthur Brown. They married in 1978. Smith and Steve Allen co-wrote two songs—After You and After Awhile. Smith wrote the music and Allen the lyrics. She also wrote others.

All four albums by Smith are superb—Jennie Smith (1957) and Love Among the Young (1958), both arranged by Ray Ellis; Nightly Yours on the Steve Allen Show (1963) with Mort Garson, and Jennie (1964), with arrangements by Bob Enevoldsen and a band conducted by Donn Trenner, Steve Allen's musical director.

Here's Allen's This Could Be the Start of Something Big...

And here's Never Had This Feeling Before...