SOURCE: ALL ABOUT JAZZ PUBLICITY
June 14, 2010
Sign in to view read count 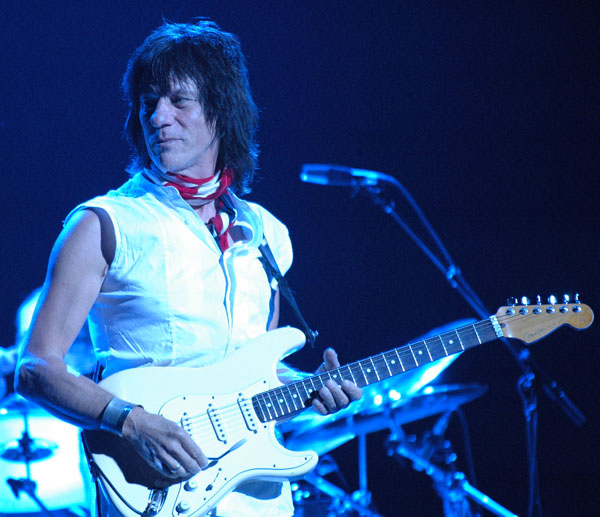 slideshow
Over 100 minutes and 27 songs, in his June 8th show at the New York jazz club Iridium, Jeff Beck did not play a single classic-rock heavy-blues or fusion-workout number from his own long catalog of records.

No “Freeway Jam," “Blue Wind" or “Beck's Bolero," not even his signature immolation of the Beatles' “A Day in the Life." In fact, everything the British guitarist played in this rare small-room date -- the first of two nights at the club with the singer Imelda May and her roots-and-swing band -- was originally a hit for someone else, long before Beck made his official recording debut with the Yardbirds in 1965.

Even when Beck bolted into “Train Kept A-Rollin'" by Johnny Burnette and the Rock & Roll Trio -- a song torched a decade later by Beck with the Yardbirds -- he stuck to the clackety steam-train gait and hillbilly freakout of Burnette's 1956 version, doubling fast clipped- note lines on the top strings of a Telecaster with his thumb on the lowest bass string.

In Memory of Les
Beck's appearances -- his first New York club performance since a pair of 2003 shows at B.B. King's -- are billed as a “Tribute to Les Paul." The centerpiece of the show (which was filmed for a PBS broadcast later this year and an eventual DVD) was a run, with May, of Paul's massively popular Fifties singles with his wife and singer Mary Ford.

Paul, who died last August at 94, was a close friend of Beck's and one of his core inspirations, as much for Paul's electric-guitar prowess -- blinding speed and a precise biting country- jazz attack -- as for his historic home-lab innovations in the sound and shape of the instrument.

And Iridium was, for a dozen years, right up to his passing, Paul's regular Monday night gig with his trio, where he salted readings of his old hits and Tin Pan Alley standards with ribald jokes. Before he played a note on June 8th, Beck presented Paul's son Rus with a plaque honoring Les, who would have turned 95 the next day.

Appropriately, Beck played a Les Paul Sunburst guitar during the mini- set, and May recreated Ford's multiple harmonies on the original records, the product of Paul's pinpoint overdubbing, with a harmonizing effect that made May's voice sound like a choir of Fords. Beck stuck to the canon, including “How High the Moon," “Vaya Con Dios," and a “Tiger Rag": taken at neck-snapping velocity.

But it was also clear how much Beck, in the Yardbirds and the late-Sixties Rod-Stewart era of the Jeff Beck Group, transformed Paul's influence with the scorch and growl of black electric blues, modal raga-flavored invention and Beck's own revved-up aggression.

His solos were quick and concise but spiked with skittering clusters of growling-treble notes, meaty skids down the neck and, at the very end of one ruthless break, a deep bass-string snort. And whenever Beck and May's band -- guitarist Darren Higham, drummer Steve Rushton and Al Gare on the bull fiddle -- lit into a jump-rhythm number such as “Bye Bye Blues," it was like getting the stutter, gulp and fire of Beck's Yardbirds instrumental “Jeff's Boogie." but with more Sun Sessions bounce.

Party Time
“When I found out our next guest was playing around the corner, I couldn't let him get away," Beck said, announcing Gary U.S. Bonds, who was in town for a show at B.B. King's but made time to do his 1960 single “New Orleans" with Beck at Iridium.

Beck also brought guitarist Brian Setzer of the Stray Cats out for Eddie Cochran's “20 Flight Rock" -- with the two on heated alternating breaks -- and Joe Turner's “Shake Rattle and Roll." Beck snarled in sync with a three-piece horn section for “Peter Gunn" and played a striking solo -- creating an angry sobbing effect with quick shivers of the whammy bar as he fingerpicked and tapped the strings -- in the Shangri-Las' “Remember (Walking in the Sand)," the newest song in the whole show.

But for all of Beck's fond retrovision at Iridium, the impatient modernism in his virtuosity whenever he takes any other stage was always evident, sometimes right in your face. Beck started Santo and Johnny's 1959 instrumental “Sleepwalk" by emulating the weeping-steel melody with a white Stratocaster, a bottleneck and discreet rolls of the volume knob. But he finished up with familiar bravado, tapping the strings with the bottleneck before sweeping up the strings with a loud vicious flourish.

Beck spent tonight examining his roots in love and detail -- particularly his eternal debt to Les Paul -- but he celebrated them all as living history.