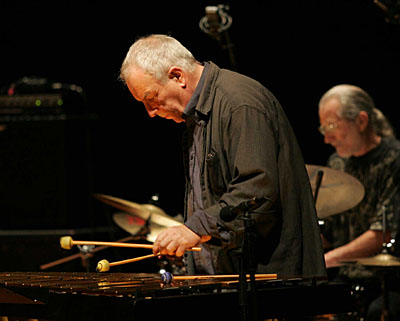 Matinier, whose distinctive sound is reminiscent of Astor Piazzolla, is regarded as one of the most adventurous virtuosos on his instrument and is a jazz and new music celebrity in Europe.

Karl Berger, co-founder and director of the Creative Music Studio and six-time winner of the Downbeat Critics Poll as a jazz soloist, has been a highly respected artist in contemporary music for several decades.

They will be joined by vocalist Ingrid Sertso, bassist John Lindberg, and cellist Tomas Ulrich in a program that features new works by Karl Berger and selections from Karl Berger's Suite “No Man Is an Island", a stunning live recording from the German Donaueschingen Festival of 1995, in which Matinier and Ingrid Sertso participated as soloists. Their collaborations have been praised as “unexpected and exquisitely beautiful."

Karl Berger's compositions received the highest critical acclaim: “This is music of great maturity and coolness."(Jazzdimensions).
“Engaging, thoughtful, and playful music that never fails to entertain and - if you are patient enough - enlighten."(Jazz Review)

This concert, and its follow-up in Woodstock, New York on Sunday, December 8 at the Kleinert/James Gallery, is supported in part by grants from the Chamber Music America's French/American Exchange Program and the Creative Music Foundation.