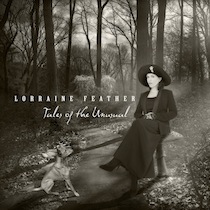 Tales of the Unusual is an album released in February of 2012, composed of thirteen original compositions with lyrics by Lorraine Feather and music by Shelly Berg, Russell Ferrante (of the Grammy-winning group Yellowjackets), Eddie Arkin, Enrico Pireranunzi, Nino Rota, Edvard Grieg and Tony Morales. The theme of the album is unusual people and strange events, some of them inspired by film (“The Usual Suspects”), books (“The Hole in the Map,” which follows the adventures of Amazonian explorer Percy Harrison Fawcett) and television (“Out There,” describing the relationship between lead characters Dana Scully and Fox Mulder on the television show The X-Files.)

This is the second Lorraine Feather album in a row to have received a Grammy nomination; her 2012 Jazzed Media stages-of-life project, Ages, was Grammy-nominated in the Best Jazz Vocal Album category. Her 2013 release will continue to center on collaborations with Feather’s three longtime collaborators Berg, Ferrante and Arkin. An additional song is a lyricized version of a movie theme by Dave Grusin, with whom Feather began working in 2012; another has music by Joey Calderazzo.