Jazz with Dominican accents and flavours: A reality in South Florida 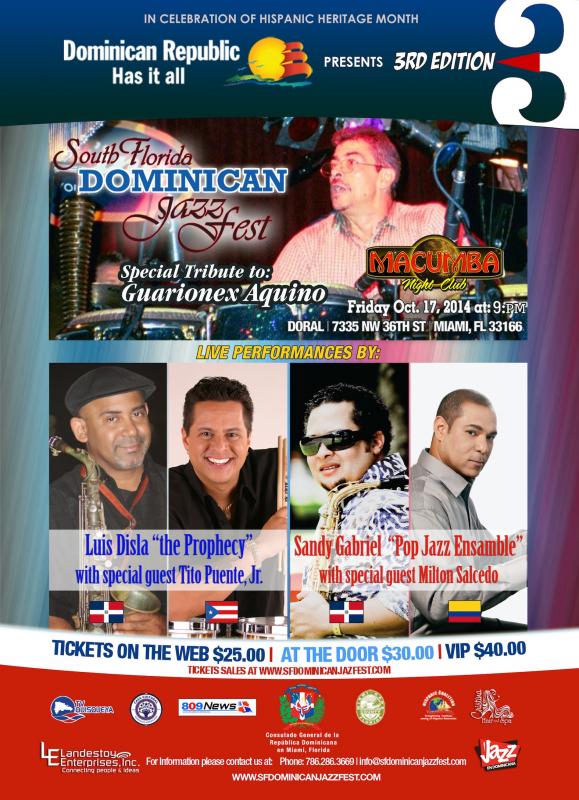 In October 2012, Landestoy Enterprises presented a completely new and exiting concept from the Dominican Republic: The South Florida Dominican Jazz Fest. A multicultural event that brought to Florida the best Jazz currently being made by musicians in the Dominican Republic as well as Dominicans living in the United States. Last October (2013) the second version of the successful festival was held and Miami is currently preparing itself for the third consecutive version.

The level of success of the presentations have been such, that both the City of Miami, via its Mayor; as well as the Miami-Dade County, via its Director, officially declared October 19th as “South Florida Dominican Jazz Fest Day."

Miami witnessed, with sold out performances, the Jazz proposals from the land that gave Merengue & Bachata to the rest of the world. Top notch presentations were delivered in various genres of Jazz, in fusions with the rich native rhythms of the Dominican Republic.

The main goal of the event organizers was that of introducing “Dominican Jazz" to South Florida, by far exceededing the expectations in each of the first two years. And, since the end of last year's event, calls and e-mails have not stopped—asking about the 2014 version.

On Friday, October 17th, for one complete evening, jazz lovers from Miami and throughout the State of Florida will once again be able to enjoy the best talents from the Dominican Republic and the United States.

HIGHLIGHTS The bands that will be performing are considered top performers locally and internationally —the mix of styles will make for an exciting and electrifying foot stomping jazz concert!!! The South Florida Dominican Jazz Fest 2014 is dedicated to one of the legends of Dominican Jazz, percusionist Guarionex Aquino!!!

GROUPS Luís Disla & Prophecy with special guest Tito Puente Jr. This excellent saxophonist born in Salcedo (Montecristy, Dominican Republic) and now living in Florida is a producer, arranger, composer, instrumentalist and educator, with a very active career. He has dabbled in all genres with great success, and it is in contemporary Jazz where he has created a unique style, so much so, that it has earned him a nomination for the Grammy Awards. He has worked with many greats such as Celia Cruz, Tito Puente, Mongo Santamaria, Mario Bauza, Juan Luis Guerra, Tropicana All Stars, Israel “Cachao" Lopez (Cachao), Carlos Santana, Wyclef Jean, Nestor Torres, Armando Manzanero, Jose Luis Rodriguez and José José, among others. Disla shows not only a great musicality and sound but also a spatial approach in his “solos," which combine well with the other musicians.

Sandy Gabriel POP Jazz Ensamble & POP Jazz Ensamble and their guest of honor&#151Colombian pianist Milton Salcedo. Renowned dominican sax man Sandy Gabriel takes the melodic thread of jazz to its maximum consequences. Owner of refined technical accuracy in the playing of all wind instruments; and as well of deep feelings, the purity of his instrument sticks out in the middle of the most complex musical structures, seeming as if it were a spontaneous exaltation of sound itself and it's musical craft. Besides being an excellent creative instrumentalist and composer, Sandy Gabriel is a band leader who knows the fair and flexible metrics of time and while still playing expanding his musical influence to achieve communication and internal correspondence with his band that only the best jazz groups world attain.