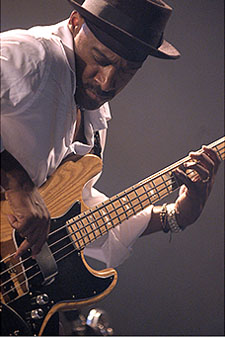 slideshow
There's lots going on in jazz and creative music this week in St. Louis, and so you don't miss out, here's a special early edition of our weekly highlights post...

Tonight, bassist Marcus Miller and his band return to St. Louis to begin a three-night stand continuing through Thursday at Jazz at the Bistro.

Miller, also known for his production work on behalf of musicians including Miles Davis and David Sanborn, is on tour promoting a new album, Afrodeezia. As the title suggests, the recording adds some African and “world music" flavors to Miller's usual stew of funk and jazz elements.

For more about that, plus videos of performances of music from Afrodeezia, see this post from a week ago Saturday. And for even more, Miller (pictured, top left) talked with Calvin Wilson of the Post-Dispatch for a brief preview story about the gig.

Also tonight, baritone saxophonist Jonah Parzen-Johnson will be in town to perform at Foam, 3359 Jefferson Ave. You can find out more about him and see some examples of his electronically augmented solo performances in this post from last Saturday.

Singer Joe Mancuso will be this week's featured performer for the Whitaker Music Festival at the Missouri Botanical Garden; Cabaret Project St. Louis presents their monthly “Open Mic Night" at Tavern of Fine Arts; and guitarist and singer Tommy Halloran plays at Nathalie's.

Guitarist Dave Black and friends, including featured vocalist Feyza Eren, will perform at Nathalie’s; and pianist Brad Ellebrecht and singer Diane Vaughn will play a duo show at Tavern of Fine Arts.

The trio of bassist Bob DeBoo, saxophonist Dave Stone, and drummer Montez Coleman will perform for the first of two nights at Jazz at the Bistro; and the Jazz Edge Big Band presents “A Tribute to St. Louis Saxophonists" at the Touhill Performing Arts Center, with guest performances from Eric Person (pictured, center left) as well as the Bosman Twins, Willie Akins and Paul DeMarinis.

Rose presents a free performance of “The Life and Music of Etta James" at the  Emerson Performance Center on the campus of Harris Stowe State University; and singer Dean Christopher reprises his “Rat Pack & More" show at One 19 Tapas and Wine Bar.